With attendance of 64,000 people, SHOT Show 2015 was second only to last year’s 67,000 record-setting show. From Industry Day at the Range to the closing Friday, there was plenty to see and learn about the progress of the firearms industry. I missed the opportunity to get into the NSSF Press Conference on Women and Gun Ownership that took place on Wednesday, January 21st, as the room was overflowing before we got there at 20 minutes before the event and the doors were locked. Julianna Crowder of A Girl and A Gun shooting clubs for women (see the November/December 2014 issue) was in attendance with a number of club facilitators. Women’s products made by and for women are becoming much easier to find. It seems we’re finally being offered more than just pink versions of guns and accessories, though pink was plentiful for those that like it.

I turned my focus toward products that might be of interest to any shooters, particularly where self-defense with, and concealed carry of, firearms are concerned.

Starting with firearms, we enjoyed shooting some new things as well as trying new to us items at the Boulder City Gun Club on Industry Day. The Sphinx pistols, by Kriss, were very easy shooting and fit the hand well. Ruger has re-done a version of the LCP in .380ACP to include real sights and a tuned, skeletonized trigger. Also, they’ve further improved on their custom shop GP100 revolver with an eye toward attracting competitive revolver shooters. It’s well-fit, with a tuned trigger that’s very sweet and a recessed crown at the muzzle to ensure continuous accuracy. And speaking of revolvers, Korth had a new 9mm lightweight snubbie, the Sky Marshal, set up to use standard 9mm x 19 pistol rounds without moon clips. Korth built speedloaders to accompany their unusual design. The gun shot pretty easily in spite of its weight. It’s quite a piece of meticulous engineering!

It was a big year for IWI out of Israel. Not only is their bullpup battle rifle, the Tavor in 5.56 Nato, beginning to catch on in the US, but they are bringing back the GALIL, the Uzi pistol, and the smaller version of the Desert Eagle, the Jericho. I got to strike firing an Uzi off my bucket list. Look for more from this author on the Tavor and the Jericho in upcoming issues. 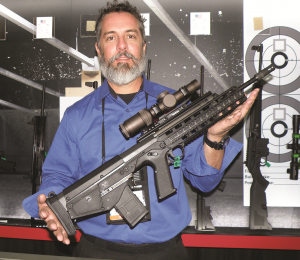 Kel-Tec has a pistol/carbine, the PLR, in both .223 and .22LR calibers. They also have a bullpup carbine, the RFB in .223.
If IPSC is your sport, STI has a ready-to-run gun with all the bells and whistles. The DVC Open shoots 9 x 19mm or .38 Super with a trigger/sear action tuned to 2 lb. Of course, STI has its regular line of defensive and sport pistols that are for everyday use as well.

I was impressed with the look and feel of Walther’s CCP compact pistols in 9mm. They have good hand fit and feel as well as high capacity yet are still of a size to be concealable. Another gun in the carry sized arena is FNH’s FNS-9 Compact. It, too, was something I could get my hand around but had enough size to be controllable for any shooter. It comes with 3 magazines; one with a flat baseplate, one with flared and one extended. H&K is offering a compact polymer frame gun, the VP9, that has interchangeable backstraps and a nicely ergonomic fit as well.

Taurus made quite a splash with their new Curve pistol. Truly unusual, this gun with a curved polymer frame has a clip for affixing it to the waistband on your trousers. It has peep sights, and LED white light and laser auxiliary sights built in. It comes in .380ACP caliber with a 6 + 1 capacity. Taurus also offers their TCP ultra-compact .380 with little cocking wings that fold in and out from the slide to aid in racking it. Their compact Model 85 revolver is now being offered with a removable hammer spur to aid in concealability.

For .380 aficionados, Browning is now offering a 1911 Commander style pistol, scaled to 85% of stock size, in this caliber. It has an 8+1 capacity. And speaking of 1911s, Nighthawk has their gorgeous Lady Hawk in 9mm. My favorite is the blue, but it comes in several other finishes that are very nice.
Optics for handguns were being showcased by many manufacturers. Glock is now offering their Model 40 in 10mm with an optic sight. Sig Sauer has a line of optics for both handguns and long guns. Trijicon, of course, has some very nice offerings for handguns as well. These are just a few of the choices we saw.

In other sighting systems, Crimson Trace has a green laser option for the Glock 42 that mounts to the front of the trigger guard and has a two hour run time. For guns with rails, they have rail mount lasers in both red and green. LaserMax also has a trigger guard laser for the Glock 42 as well as making the system for Beretta’s little Pico .380 pistol that integrates nicely into the gun. They have plenty of rail mount systems in both green and red as well. XS Sights is making their iron sighting system in suppressor height for those looking to find a good set of sights to run when using a pistol with a silencer.

One of my interests for this show was storage options for guns of all sizes that allow for security of one or two firearms outside of the main storage safe. Many of us have homes with more than one level. If the sleeping area is some distance from the main safe, a secondary option for immediate access to a defensive firearm that you don’t plan to carry on your body is nice to have. We also were interested in securing a gun when traveling with it. We found some workable options. Stack-On has wall mount long gun brackets, single pistol and multi-gun vaults that could be tucked out of sight for securing your defense guns. American Furniture Classics has some attractive cabinets and benches with locking compartments for securing guns cleverly hidden in them.

For outdoor enthusiasts, Piece Locker has a waterproof vault designed to be mounted to a motorcycle, boat, pick-up bed or ATV that keeps a long gun secure and protected from the elements until needed. MagStorage Systems has a very nice organizing rack for AR-15 magazines that can cut down clutter in your safe or gear bag/locker from those rifle magazines that seem to accumulate everywhere. Their design takes into consideration any non-stock baseplate add-ons people use and keeps magazines neatly in one place ready to grab and go. The company is currently working on a design for pistol magazines, too. 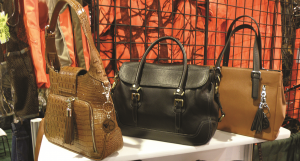 Concealed carry purses were plentiful at the show. Gun Tote’n Mamas had their usual beautiful selection of fashionable bags. Designer Concealed Carry always has lovely options that would rival any big-name designer of ordinary handbags, such as Gucci or Coach, with the added plus of a good concealed carry system built in. For men or women, they have several styles of messenger bags that even the coolest hipster would be proud to own. EAA is expanding their Pavona line (see my review of gun and purse in the last issue) and have more styles in handbags as well as some concealed carry clothing options. Concealed Carrie has nice ambidextrous carry bags and has developed an athletic shirt with a carry option for working out or just walking the dog. New to me, a company called Been and Badge had some nice things at the Industry Day non-shooting booths that are designed by a female law enforcement officer.

In holsters, Lisa Looper was in attendance with her Flashbang and the entire line of concealed carry gear. Included this year is her new IWB (inside the waist band) holster designed to work in either appendix or cross-draw positions. Also for deep concealment or athletic wear is Pistol Wear, either in a belly band for under shorts, sweats or other garments without belt loops or a chest band with a shoulder strap for under T-shirts, blouses or shirts. This rig positions the gun like a shoulder holster but is soft and more comfortable. Alessi, maker of fine leather holsters for 40 years, has come out with a leather straight drop design that has an innovative locking clip that fastens to the waistband of your garment without a belt and stays put. It has an extended sweat guard to enhance comfort and protect the firearm without being oversized and in risk of folding or flopping.

Good news for those who find gun cleaning products too smelly or worry about toxicity around children and pets. Breakthrough has a line of solvents and lubricants that have no scent and are non-toxic enough to use anywhere. Hunters might find these advantageous. From Blitz comes a line of cleaning and oiling cloths that also have very little scent and would be ideal to tuck into the range bag for cleanup just about anywhere your training, competing or hunting might take you. This long-standing company also has household cleaning and jewelry care products.

It’s always good to catch up with old friends at the SHOT Show and, best of all, make new friends. There’s more than any one person can see in four days and this is just a summary of what I found most interesting to me this time around. As 2015 unfolds, more will be revealed.