In the Old West the caliber of the Single Action Army you purchased was dictated by need, preference, and what you could afford. The .45 Colt was the most effective for use against the lawless, while the .44-40 was seen as the best hunting cartridge—and a formidable rifle cartridge as well. Today Cowboy Action Shooting has different demands. We will choose a revolver for easy shooting and economy because we will fire a lot of ammunition in practice and in matches—probably more in a year than drovers or lawmen fired in a lifetime. The .45 Colt is still a good cartridge, but the .44-40 kicks less and works great in rifles. The .357 Magnum/.38 Special combination is often recommended for ease of shooting and economy. Just about any gun store stocks .38 Special but the cowboy calibers are less common. While personal preference means a lot, one of my favorite all time Western cartridges is the .32-20. Now, if your single-action revolvers double as defense guns—nothing wrong with that—then the .38, .357 and larger calibers are a better choice. If your cowgirl guns are recreational, but may be used for small game, then the .32-20 Winchester Centerfire is a great cartridge. 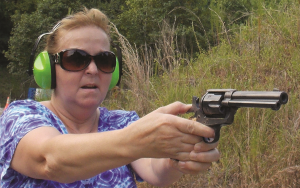 Small bullets cost less than big bullets. The 100- to 115-grain bullets used in .32-20 ammunition are less expensive than the 200-grain .44-40 or 250-grain .45. The cartridge uses less powder and shipping costs for a like number of boxes of ammunition is less. As a rule of thumb, .32-20 ammunition, whether the excellent loaded ammunition offered by Black Hills Ammunition or quality remanufactured loads, is three to four dollars a box less than comparable .44 or .45 ammunition. A real savings comes if you handload your own ammunition. The .32-20 WCF uses less powder than the larger cartridges, but 500 cast bullets from a reputable maker such as Missouri Bullets averages around $32 with the .45 about $38—and less shipping costs.
But the .32-20 has more good attributes than simply economy.

It is historically accurate for Old West guns and a great all-around cartridge. The original .32-20 loading featured a 115-grain flat nose bullet over 20 grains of black powder for 1,200 fps from a rifle. Velocity was on a par with most black powder loads of the day. Accuracy is often excellent; however, some experimentation may be needed with cast bullets to obtain this accuracy. The original loads used soft lead that bumped up into the rifling. Hard cast bullets may not offer the same accuracy. The black powder load hit about 900 fps from the 7½ inch barrel Colt revolver. Modern loads are loaded down in order to insure safety in well-worn older firearms. Quite a few older firearms of poor quality, such as the Basque copies of the Smith & Wesson, were none too safe when new. Below in the chart are some of the results had with modern loads in two .32-20 WCF firearms. Groups are five-shot groups.

After some experimentation my handloads were sometimes better and sometimes worse than factory loads, but I was able to produce both accurate and powerful loads. A singular group with Titegroup powder and the Missouri Bullet Company 120 FB bullet exhibited a 2-inch group at 50 yards at 1,150 fps velocity. I have also used the Hornady 100-grain XTP for excellent results at a long 100 yards, exhibiting one 3.5 inch 100-yard group with H110 powder for 1,400 fps. Remember, my rifle is a modern (1919) steel rifle. Such loads should not be used in the handgun. This is simply an illustration of the potential of the .32-20 as a varmint and pest round. The .32-20 is a mild cartridge to fire and accurate enough for small game at modest range—that means iron sight range. The .32-20 was discontinued from production in the 1940s and only recently revived in Uberti single action revolvers. The .32 Smith & Wesson Long has shared a similar fate. These cartridges were by and large replaced by the .38 Special and .357 Magnum. It is good to have a mild shooting .32 to bridge the gap between the .22 and .38 caliber cartridges. The .32-20 is light for deer in spite of the deer taken with this cartridge in the past. An interested handloader may bump the Hornady 85-grain XTP up to 1,900 fps and the 100-grain XTP to 1,700 fps in a good tight rifle. Never use heavy loads in a Winchester 1873—they were iron not steel—and suited only for black powder!

The Winchester ’92 illustrated was made in 1919.  In short, if you grew up shooting the .30 carbine what it will do the .32-20 will do. The Winchester rifles are usually more accurate than the .30 carbine, however. I am making a pretty big case for the .32-20 because it is a great cartridge for a lot of things. If you choose the light kicking .32-20 for cowboy action purely based on economy and accuracy that’s fine. But if you enjoy firing the rifle at long range or hunting game in the rabbit to turkey and even mountain lion class, the .32-20 is also a great caliber.

While it is off the subject of cowboy action, Smith & Wesson as well as Colt manufactured a good number of .32-20 double-action revolvers. They are fun to shoot and accurate but not as strong as the Colt and Uberti Single Action Army type revolvers. They should be fired only with the factory standard ‘cowboy’ type loads. When all is said and done the .32-20 WCF combination of rifle and pistol is a good one for cowboy action. If you do not enjoy being beat by recoil but rather enjoy an economical, accurate and pleasant cartridge, the .32-20 WCF is perhaps the best all-around choice for Cowboy Action Shooting. For many hunting pursuits it is still an excellent option. This is a cartridge too good to die!