A Sweep of Every House

On Independence Day weekend California Governor Jerry Brown, with the stroke of a pen, created several million brand new criminals in the once-Golden State. Before jumping on a plane for a European vacation, he signed six of the eleven gun control bills sent to him by the one-party lynch mob that California’s legislature has become. All six laws will go into effect next year. They create new crimes that will be committed simply because of Governor Brown’s signature, not by any actual misdeeds of hapless Californians against person or property.

Especially alarming is Senator Loni Hancock’s (D-Berkeley) magazine confiscation bill, SB 1446. This new law is notable in that it creates a new crime out of what the legislature previously declared perfectly legal—owning magazines that hold more than ten rounds. They had outlawed the manufacture, sale, and importation of greater than ten round magazines, even as the rest of the country continued to allow them. But the ones currently owned were still allowed.

No more. In a classic and calculated plunge down the slippery slope, Senator Hancock, whose contempt for gun owners is legendary, has taken the gun prohibition movement another giant step toward their goal. And we all know what that is, because they’ve told us more than once.

Senator Hancock was quoted in a July 11 Los Angeles Times opinion article regarding enforcement of her new law:

“We don’t have the resources to make a sweep of every house in California. There’d need to be a warrant to search your house or car for another reason, or if you’re stopped on the street and have one.” 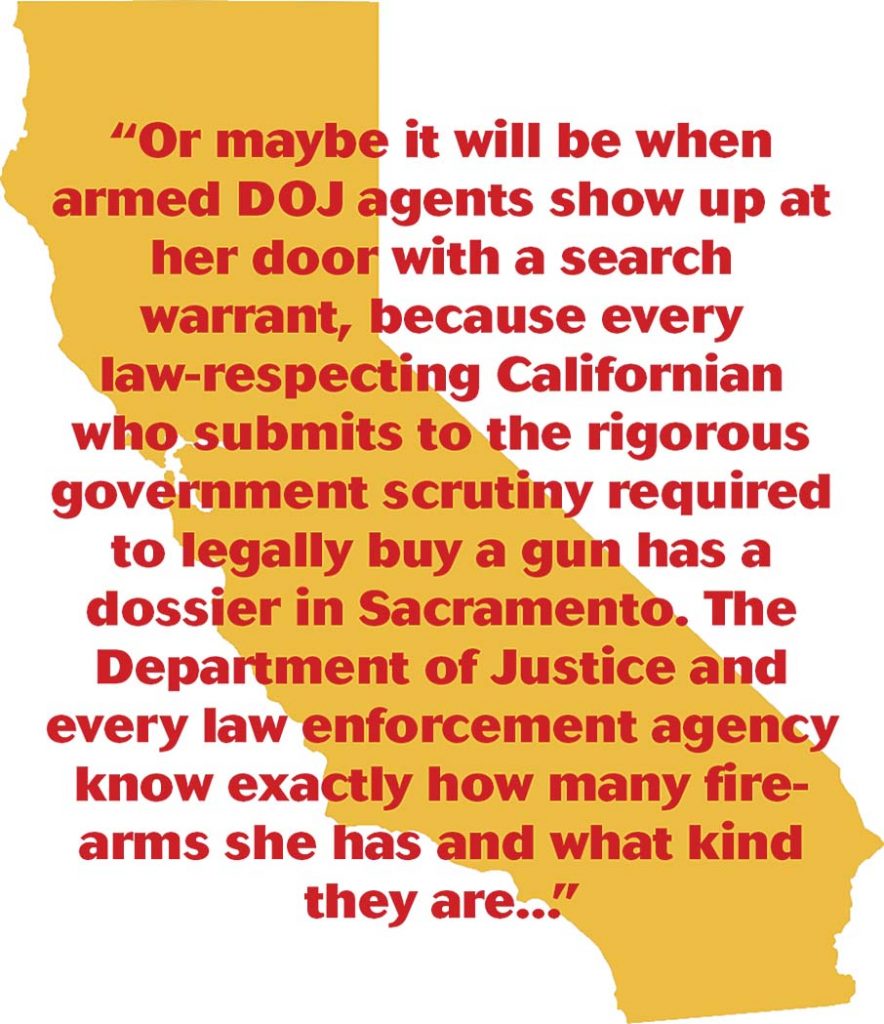 It seems the only thing holding back Hancock and like-minded legislators is a lack of enough SUVs full of armed DOJ agents to do a Soviet-style door-to-door search of every California home.

The criminals-to-be mostly don’t even know their fate yet. That’s because decent people believe that the law is intended to prevent and punish bad deeds, such as wrongfully injuring or killing another human being, or robbing or raping them. The key concept, which enjoys wide consensus among the citizenry, is that righteous laws preserve order by penalizing harmful conduct.

But most California gun owners, like most people, don’t follow politics. They simply try to live their lives unmolested. And so it will come as a rude surprise when the increasingly long arm of the law reaches them at last. Maybe it will be at the shooting range, when an off-duty cop notices she’s using the 15-round magazines that came with her pistol when she bought it back in the 1980s. Maybe it will be when he puts an old rifle up for sale, and in the process it’s discovered that the rifle isn’t registered with the California Department of Justice.

Or maybe it will be when armed DOJ agents show up at her door with a search warrant, because every law-respecting Californian who submits to the rigorous government scrutiny required to legally buy a gun has a dossier in Sacramento. The Department of Justice and every law enforcement agency know exactly how many firearms she has and what kind they are, and will be able to convince a judge (especially one who wants to be convinced) to issue a warrant to seize her now-illegal contraband. And to haul her off to jail.

The new criminals will be the hundreds of thousands, possibly millions of Californians who own firearm magazines that hold more than ten rounds. They will be the owners of rifles specifically manufactured to comply with the last round of design restrictions (the bullet button). They will be sportsmen and women who lend their firearm even momentarily to a hunting companion or fellow target shooter who is not a family member.

The gun prohibition movement takes full advantage of public ignorance of previous gun control legislation. In the case of SB 880, the bullet button ban, it took Gun Owners of California’s legislative representative to remind legislators that they had specifically approved rifles that required the use of a tool (i.e., the bullet button) to remove a magazine for reloading.

But what the legislature (and then-Attorney General Jerry Brown) once anointed as perfectly legal they now denounce as a “loophole.” Moving the goalposts of what is and is not legal is part of the long-term strategy of incrementally increasing restrictions. The “endgame” of that progression, as Chicago Congressman Bobby Rush said in 1999, is “to see the manufacture and possession of handguns banned except for military and police use.”

Like other gun-grabbing urban Democrats, Rush himself is a paragon of hypocrisy, having advocated criminal violence, and having been imprisoned for violating firearm laws.

So it is with South Central Los Angeles state senator Isadore Hall. Among the gun control bills Governor Brown signed was his SB 880, the bullet button ban. Hall wants to make a name for himself as the legislator who banned “assault weapons.” This too is an example of breathtaking hypocrisy, since Hall’s district includes the most violent crime-ridden section of Los Angeles.

If Hall wanted to follow the faulty logic of banning guns to stop violent crime, he would go after the tool preferred by thugs everywhere, including those in his district—high quality handguns. But instead, he demonizes the modern rifles most favored by 21st century American gun owners for hunting, marksmanship competitions, and self-defense. According to the FBI’s Uniform Crime Report, rifles of any kind are used in fewer than 3% of murders, and modern rifles are an even smaller fraction of that number.

So Hall, posing as a crusader against “gun violence”, diverts attention from the hardcore daily violence in the district he’s responsible for and condemns sportsmen and women and other innocent Californians who next year will become criminals because of his deception.

We can expect such sleaze from the majority party that runs California. It’s how they’ve done business for years now. But Governor Brown knows better. As a former mayor of violent Oakland and having served as California’s Attorney General, Brown has dealt with criminals. He knows the difference between criminals and good citizens. Had he followed his better instincts he would have vetoed every one of the bills.

Successful democratic government requires that laws be just and consistently enforced. To the degree that laws are capricious and unrighteous, the people’s respect for them is weakened. Governor Brown’s vacation will afford the former seminarian the time to reflect on the damage he has done to California.

About the author: Timothy Wheeler, MD, is director of Doctors for Responsible Gun Ownership (drgo.us), a project of the Second Amendment Foundation.