An Affordable 9mm from SCCY

A few years ago when SCCY introduced the CPX 9mm handgun. I found the piece to be reliable, well designed, and offered at a fair price. The early versions with a frame mounted safety sometimes suffered the safety moving to the on position during firing. 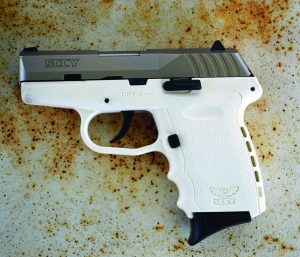 While SCCY has corrected the issue―and some of it may have been caused by the shooter’s thumb contacting the safety―I recommend the version without a safety.

This is the CPX 2. A pistol with a ten-pound double-action-only trigger may be carried without a manual safety. True safety is between the ears and the trigger finger is the true safety. Just the same be certain you are comfortable with this type of handgun and always carry the handgun in a holster.

I wished to test a new model SCCY CPX 9mm in order to see if there were any improvement in the pistol’s performance and finish.

The stainless slide and polar white frame version tested is clearly more attractive than the all black pistols I have previously tested. The slide is well polished and there are no tool marks inside or out. I recall a reliable handgun from previous testing and the new pistol follows this line closely. Perhaps the most attractive feature of this handgun is its price. At $227.63 at present from Cheaperthandirt.com the SCCY CPX 2 is priced at almost exactly half the price of the Smith & Wesson Shield or Glock 43. While they are different handguns this is an important frame of reference.

For this modest outlay you get a locked breech action self-loading pistol with a double-action-only trigger mechanism, a 3.1 inch barrel, a stainless steel slide, well designed sights with three dot inserts, two ten round magazines and a trigger lock with two keys.

The CPX is light enough for constant carry at 15 ounces. A heavier and more powerful handgun might be left at home, as I often say, and there is little excuse not to carry the SCCY. The trigger both cocks and drops the hammer. The action is not reset by the slide. The trigger may be pressed repeatedly in practice with a triple-checked unloaded pistol.

This is an advantage for those wishing to master the trigger action by dry fire practice. The pistol is hammer fired.
The CPX 2 is only 6.0 inches long, 4.6 inches high and a little over an inch thick. The grip fits most hands well. The pistol is supplied with finger grip extensions on the magazine. There are flush fit flat baseplates supplied. I think that a good program is to deploy the flush fit magazine for concealed carry, particularly pocket carry, and use the finger grip magazine for the backup load as the finger grip makes for good leverage when grasping the magazine.

The pistol isn’t designed to handle +P ammunition. In a handgun this size +P would be difficult to control. Slide velocity might outstrip the ability of the magazine to feed properly. +P loads would also cause excess wear on the small parts of the action if used extensively. I have fired the pistol to the tune of over 250 cartridges at present to get the measure of the pistol. What it does, it does so ably, but it isn’t a pistol that will be found useful much past 15 yards for most shooters.

For this review I chose two credible loads, While the pistol has proven reliable with other loads, it pays to test a handgun with more than a few choices. I used the Black Hills Ammunition 125-grain Honey Badger and the Black Hills Ammunition 124-grain JHP. The Honey Badger is a projectile that is machined from solid copper and which features sharp flutes that add to wound potential. Fluid dynamics are part of the equation for wound potential.

I also used the Black Hills Ammunition 124-grain jacketed hollow point. The Honey Badger load broke about 950 feet per second, the 124-grain JHP about 1010 fps. These loads are controllable and offer wound ballistics superior to the .380 ACP. The pistol is comfortable to fire without excess recoil. The long double-action trigger provides good control. Trigger reset isn’t as fast as some pistols but the action is consistent and reset is smooth.

As you fire press the trigger to the rear, allow the pistol to reset during recoil, and then as soon as the sights are back on target fire again. I fired the pistol extensively at 5, 7 and 10 yards. At 7 yards, the most likely defense range, I was able to put an entire ten round magazine into a space the size of a hand. That is life-saving accuracy. None of the loads were difficult to manage but the 125-grain Honey Badger seemed most pleasant. Shot placement means the most and putting the bullet where it will do the most good is the key.

Firing such a handgun at long range for accuracy isn’t relevant but useful in gauging the ability of the shooter and the pistol. After all we do not wish to be helpless if confronted with a threat at longer range. I took the time and made the effort to fire the SCCY CPX 2 from a braced barricade firing position at 15 yards. The time I took to do so isn’t relevant to personal defense shooting but I took the measure of the pistols accuracy. I fired a group that measured 3.5 inches at 15 yards previously and met this standard with the Black Hills Honey Badger load. The largest five shot group I have fired at 15 yards went nearly 4.5 inches. Based on my experience with the SCCY CPX 2 9mm pistol and quality ammunition the piece is capable of striking a threat in the chest at 25 yards. That is a lot of reach for a 15 ounce 9mm.

The pistol is intended for personal defense and that means close range. This isn’t a field pistol for dusting off coyote and pests. Home defense would also entail close range use and gun-handling is as important as marksmanship. The pistol handles well and offers ten shots fast to save your life. The pistol is compact and has been carried in a Blackhawk! pocket pistol during most of the trial. The CPX 2 hasn’t failed to feed, chamber fire and eject in several range sessions totaling over 250 cartridges. The SCCY is a neat little pistol with good performance for the price. For shooters on a tight budget or looking for a second or backup gun the SCCY may be a life saver.