When choosing a personal defense handgun, the standards for reliability must be high. Wound ballistics, accuracy and control are important but mean little if the handgun is not completely reliable. Absolute accuracy in the target sense isn’t as important as practical combat accuracy. This means the ability to draw the handgun and get a hit quickly at combat ranges. I prefer the pistol not be useless past 15 yards as well. While a service grade handgun such as the Glock 19 in 9mm may be capable of a two and one half inch group at 25 yards, four inches at 15 yards in a subcompact handgun is reasonable. I want all of the gun I can conceal and carry and so should you. Over the years as a peace officer I have faced the mentally deranged and the plain mean and stupid. Some were evil persons.

As I write this I am suffering from a periodic flare up of an old injury. Having dealt with both targeted and incidental victims I realize how dangerous the world is. I met the adversary half way as most victims do but then that was my calling. I attempted to arrest those with abusive urges. Over one hundred years ago Gustave Mace of the Surete was chasing criminals that psychiatrists were beginning to realize suffered from “moral insanity.” Little has changed. A good pistol on the hip helps in dealing with such threats. A .32 or .380 pistol doesn’t look very good to those of us schooled in wound ballistics and, more importantly, with practical experience. The .38 Special and 9mm Luger, respectively, represent a realistic minimum.

The 9mm compact pistol holds more rounds than the .38 and is easier to use well. A pistol that has Beretta Nano is A Reliable, Comfortable 9mm Compact Nanotechnology at work—the Beretta BU 9 Nano is compact and at 20 ounces unloaded, light enough for all day carry. 19 grown on me is the Beretta BU 9 Nano. The Nano is compact, reliable, and comfortable to fire and use. The Nano is a polymer frame handgun with a doubleaction-only lockwork. The Nano has several interesting and different features. As an example, there is a positive firing pin block that keeps the pistol’s striker locked to the rear until the trigger is completely pressed to the rear. Most unlock and drop, the Nano’s lock protrudes from a small opening in the slide as the trigger is pressed, and then drops again after the pistol is fired.

To disassemble the Nano it is required that the trigger is pressed to take pressure off of the striker. A small pin in the receiver is pressed with a pin point to unlock the striker. (Be certain the chamber isn’t loaded!) The pistol is disassembled by turning a key on the right side of the receiver. The key’s head looks like a screw head. This system was used rather than a take down lever in order to produce a compact design. A feature not without controversy is the lack of a slide lock. The slide locks open on the last shot as normal, but the magazine is removed and the slide is dropped by grasping the rear of the slide and pulling to the rear. Beretta did this in order to make the pistol as compact as possible. However, it is also common for shooters firing compact pistols to allow the fingers of the support hand to contact the slide lock during a firing string. As for the absence of the slide lock this doesn’t eliminate the possibility of speed loads. When the pistol’s slide locks to the rear, drop the empty magazine and insert a loaded magazine. Grasp the rear of the slide and keep rolling. Some makers have provided guards on the slide lock and worked to prevent the problem of the finger contacting the slide lock. The Nano solved the problem. This isn’t a service pistol with an extended slide lock and take down lever, this is a purpose designed hide out handgun. The sights are also small and set atop a square or flat slide. The trigger action is relatively smooth but heavier than some at 7.5 pounds. The trigger features a lever in the center that must be pressed to fire, helping prevent lateral discharge.

The Nano is supplied with two well made magazines. The more compact flush fit magazine holds 6 rounds while the larger magazine holds 8 rounds. I have fired the pistol with both magazines. For pocket carry the shorter magazine is the better choice. For appendix or inside-the-waistband carry the longer magazine makes sense. The long magazine is easier to grasp and reload, the shorter magazine conceals well. Each has proven reliable with a variety of loads. I find the small finger hanging off of the base of the grip with the short magazine. Just the same, decent range work was accomplished. The situation is better with the 8 round magazine, but not by leagues, only an incremental improvement. The grip frame is nicely checkered, which aids in grasping the handgun. The 3-inch barrel doesn’t develop the velocity a 5-inch barrel will. Concentrate on a controllable loading that is completely reliable and do not chase high velocity in this handgun. As for control, the cadence of fire is set by how quickly you are able to achieve sight alignment after recoil. Pressing the trigger quickly accomplishes nothing. Press, fire, allow the trigger to reset as you reacquire the sight picture and fire. Use the sights at all times, The Nano fits most hands well. With the spare extended magazine the Nano handles a bit better on the firing range. at all distances. Point shooting or instinctive shooting is like driving with your eyes closed. 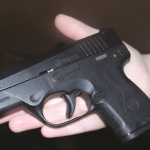 A controllable load with a clean powder burn is indicated for the Nano. I have fired the pistol with +P loads. Recoil isn’t bad. I simply prefer the more controllable loads. The Hornady XTP is a service grade load that has given good results for me. The 115-grain XTP delivered good results in the NANO. However, in deference to the short barrel Nano, I am certain that the Hornady 115-grain FTX or Critical Defense load would be the superior choice. This load shoots like the XTP, but the Critical Defense bullet was designed for civilian scenarios. Loaded with the Hornady Critical Defense bullet the Nano gives the user a high degree of protection, ounce for ounce.

I have also fired a good quantity of practice loads, designed for inexpensive range use, with good results. This type of loading is required to keep the practice regiment up without breaking the bank. Among the affordable, accurate and clean burning loads I have used in the recent past is the HPR (High Performance Downrange) 115-grain JHP. I have also used the 124-grain JHP loading from the same company. With a clean powder burn and good accuracy, these loads havegiven me meaningful practice. The Beretta BU 9 Nano is a good concealed carry handgun well worth its price. Take a hard look at the Nano, it just may fit your needs. W&G