Beyond the Purse-More On-Body Carry Options for Women

Women’s handbag manufacturers finally have caught on to the demand for concealed carry purses. We now have a nice selection of colorful, stylish bags to choose from. That hasn’t diminished the need for other on-body carry options, however. Women still need choices for carrying their protection where it’s always at fingertip distance.

“On-body carry is the most effective type of carry for everyone,” said Rob Pincus, owner of I.C.E. Training Company and Executive Director of the Personal Defense Network. “With off-body carry— whether it’s in a briefcase or a backpack or whatever—you’re compromising your ability to respond in a lot of circumstances. The bag can be grabbed, or you have to open the bag and it’s slower. On-body carry always is superior to off-body carry.” Marna Miller Tracy, owner of Tampa Tactical Supply in Riverview, Florida, agreed. “You can get separated from your purse,” she said. “Your purse can get stolen, or you can set it down. You can leave it in the car. Now you don’t have your gun on you anymore.” 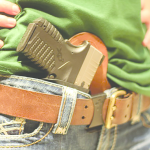 Tracy likes the Flashbang holster from Looper Law Enforcement, which goes in her bra. “I like that I can carry concealed and nobody knows I have it,” she said. Looper Law Enforcement has a number of other concealed carry products specifically for women, Tracy said. “They have an under-the-arm holster that also hooks to the bra,” she said. “Looper also has in-the-pants holsters that are designed specifically for women. They’ve taken into consideration that women wear tighter clothes and have shallower pockets than men. It all depends on what you’re wearing and how well you can conceal a gun; sometimes inthe- pants isn’t as concealable as in the bra.” One factor that affects the usefulness of the Flashbang holster, Tracy said, is what kind of bra she’s wearing. “An underwire bra that is more appealing to the eye is not as comfortable as one that has a wider front,” she said. “An underwire bra puts all the pressure from the holster in one place. The wider front spreads out the pressure so it’s more comfortable. I can get a .38 Special in my bra and nobody knows it.”

The Flashbang sells in the neighborhood of $30. Tracy said she recently has become aware of another type of braholster, the Brat from Deep Conceal. The Brat runs around $20. “I haven’t seen one yet, but I’m getting a sample to test,” she said. Pincus said many of his trainees really like the Modular Belly Band from Crossbreed Holsters. “We get an amazing response on that,” he said. “It’s a Velcro belly band; instead of just an elastic pouch, it has Velcro around the outside of it. You can attach a leather and Kydex holster.

You can wear the Belly Band under jeans or Yoga pants or sweat pants or a skirt, without any belt; it doesn’t require a belt the way a traditional holster does. The gun is secured against the band, but unlike a traditional belly band, it doesn’t have an elastic pouch that’s hard to train with and slow to present from. It has a Kydex holster that the gun clicks into and out of, and it’s very fast and very easy to train with as well.”

Pincus said the Modular Belly Band is, in his opinion, the best all-around on body carry option for women who want to carry but who don’t want to dress like men. The Modular Belly Band from Crossbreed Holsters sells for around $65. “Another thing I’m seeing many women choose is appendix carry,” he said. “It’s because of the way women are built.”

Because most women’s hips are wider than their waists, Pincus said, most of the time a shirt won’t drape well enough to truly cover a gun carried on the hip. When you take the gun off the hip, however, and put it in the centerline, you can more easily hide the gun in the bit of space created by a gently draping shirt. “Because women have breasts, they can wear shirts that hang a little over their waist in a way that allows draping over a gun carried in the centerline position,” he said. “Shirts don’t generally drape well on the 3 o’clock, 4 o’clock, or 5 o’clock positions, because of the shape of the hip. Carrying at the 1 o’clock or 2 o’clock—or the 11 o’clock if you’re left-handed—is a much easier place for women to conceal a 9mm single-stack gun, or even a double-stack gun like a 9mm Glock 26 or a small frame M&P.” Those smaller framed semi-autos, Pincus said, seem to be easy guns for women of most body types to conceal on their bodies.

“I’m seeing a lot of women coming through classes having success with that type of carry,” he said. According to Galco’s director of marketing, Mike Barham, Galco has several appendix-style holsters, including the Scout, the Walkabout, and the Stow-n-Go. The company also has several other holsters they recommend for women. “Our most popular holster is our Stinger belt holster,” Barham said. “It’s an outside the belt holster, but it is by far our most popular holster with women. It’s a standard belt holster, so they need to dress around the gun. We make it primarily for small to medium sized guns.” Barham said he thinks the popularity of the Stinger stems from its ride height. “It’s our lowest riding belt holster,” he said.

“Women generally have higher waists than men do, so a lower riding holster typically works better for them.” Galco also offers a couple other options for women, including an ankle holster and an elastic belly band holster. The Stinger retails for around $48; the Ankle Glove sells for around $63 and the Belly Band for about $60. Even if you’ve adopted one of the new concealed carry handbags, there’s still room for onbody carry in your arsenal. These are only a few of the options that are available, but with as many onbody options as are on the market today, there surely is one for every woman who wants to carry concealed.