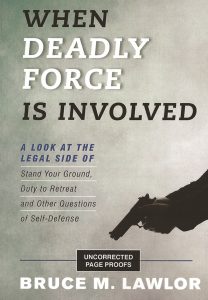 The book being reviewed is a pre-publication, uncorrected proof copy. However, by the time this review is in your hands, dear reader, it should be available both in paper and electronic forms, in order to suit everyone’s needs.

Our author, Bruce Lawlor, is eminently qualified to pen this book. A retired Army Major Gen­eral, he is a Harvard National Se­curity Fellow, and both practices, law, and teaches self-defense as a certified firearms instructor. Law­lor also works with national, state, local and private sector executives enhancing organizational and in­dividual security.

One point of order which, while obvious, must be stated anyway. Neither Bruce Lawlor, Women & Guns, nor myself are providing legal advice. Anyone involved in a situation necessitating such ad­vice should immediately seek the services of a qualified attorney, preferably one with recommen­dations. Better yet, prior to that possible event, join the Armed Citizen’s Legal Defense Network, http:/ /www. armedcitizensnet­work.org.

“It can’t be stated too strongly that if you possess a gun for self-­defense, you need to become fa­miliar with the self-defense law of your state.”

Self-defense, by deadly force if needed, is a basic, God-given right. In times past, chat has not always been acknowledged by various governments and/ or royal entities, but nowadays, the good news is that it is, mostly. The fly in the ointment is the minefield lab­yrinth of local, state and national laws regarding the use of deadly force in self-defense. Many times these laws seem at cross-purposes to each other – there’s stand your ground, duty to retreat, and more.

The book is divided in to fif­teen chapters, each of which starts off with a brief, engaging tale of someone using a firearm in self­-defense, and targets a particu­lar point regarding self-defense. Although most stories are taken from actual criminal proceeding in which the shooter was charged with manslaughter or murder, the names, dates, locations, etc. have been changed, and a bit of literary license taken for topic clarity and readability. The verdict, and the legal path which led to that ver­dict, are the actual ones. The stark reality of these situations makes for memorable teaching points.

Meticulously researched, the book ends with a comprehensive Notes section for each chapter, a Bibliography for the cited court cases, and other referenced works.

The author notes that while there are basic “ground rules” to the legal world of self-defense, laws and enforcement vary accord­ing to locale (state and city), legal precedent (prior rulings–both lo­cal and supreme court–both state and national), and the leanings of the populace, law enforcement, and governing officials at the time.

Lawlor breaks down the usual 1 ability, opportunity, jeopardy and preclusion to the following more granular eight points. In his fifteen chapters, he teases apart these points in a more nuanced manner:

Lawlor has an easy-going, en­joyable writing style, but it is also crisp, and immersive. You may find yourself wanting to tell a par­ticipant “Don’t do that!” or raging at the impotency of law enforce­ment and courts to help severely abused women, seemingly bor­dering on abandonment. Other scenarios may have you thinking “I might have said or done that myself.”

This book could lead you to re-evaluate the way in which you conduct interactions in your life -with your friends, your ac­quaintances, and with strangers. You’ll almost definitely re-evaluate the self-defense scenarios you oc­casionally run through in your head. Hopefully you are doing the latter, at lease occasionally, and thinking about how you go about your life, and potential threat sce­narios, and how to best react to them, or, better yet, avoid them entirely.