This is an important and mindopening book of recent American history and social change that is still evolving. It will open a lot of minds in America, and maybe even the United Nations, to the true importance of self-defense as a civil and human right, It was written by a professional journalist, formerly with the National Geographic magazine, a visiting professor at Brown University, who was a field secretary for the Student Nonviolent Coordinating Committee (SNCC) in his twenties during the turbulent 1960s.

The subtitle for the book is the main theme for an important perspective on the role guns played in the civil rights movement, not only during the 1950s and ’60s, but decades earlier. The main title is drawn by advice expressed by a black Mississippi farmer and community leader named Hartman Turnbow, who reappears frequently during the course of Cobb’s narrative. “With tragic foresight,

Turnbow bluntly warned Martin Luther King Jr. in 1964, ‘This nonviolent stuff ain’t no good. It’ll get you killed’,” Cobb recounts in his introduction to the main book. Turnbow is one of many people who were active in the broad based civil rights movement, and who reappears frequently in the book, armed for defense of himself and others in the black struggle for all the promised benefits of the US Constitution. He was not alone. Cobb reports on others who s h a r e d T u r n – b o w ’ s philosophy, inc lud i ng the Deacons for Defense and other formal and inf o r m a l groups, including black veterans of US military service, not just in 20th century wars, but throughout American history. 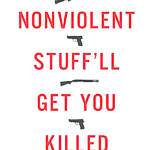 Cobb’s book is not just a review of printed histories and news clippings. It relies heavily on his memories of the mid-20th-century struggles for full citizenship, plus interviews with many of the protagonists directly involved. He and his sources don’t pull any punches.

The importance of black people being armed and their willingness to use those guns for defense of themselves and others, including the nonviolent activists in the SNCC, and to confront the Ku Klux Klan terrorists, or anyone shooting into or setting fire to occupied black homes was more important than just the Johnsonera civil rights laws. Actual armed confrontations with Southern lawmen were very few. The freedom strugglers knew they would be the losers in such an open revolution, just as Native Americans had been in the 19th century.

However, that awareness did not prevent them returning fire against unofficial white attackers. And in almost all of the confrontations that did occur, the white terrorist types retreated when guns were displayed and shots were fired toward them. To those Americans for whom the 1950s and ’60s civil rights struggle is history as ancient as dinosaurs, this is probably one of the more exciting and instructive historical documents they will ever read. Most importantly, it was written by someone who lived through and survived a very dangerous era. In his Afterword, Cobb suggests dealing with critical modern problems, including inner-city violence, by studying and understanding history.

Just before his Afterword, he concludes with this comment. “Today, gun rights are remembered as an unfortunate addition to the story of black struggle… Furthermore, today the issue of gun rights has largely come to be associated with the conservative white Right, and far too often the concept of ‘standing one’s ground’ is invoked to defend the murder of a black person. But there was a time when people on both sides of America’s racial divide embraced their right to self-protection, and when rights were won because of it. We would do well to remember that fact today.”