BUNDLE UP! Shooting in Cold Weather

It’s summer now, but fall will be upon us soon enough, and with it cooler weather. Shooting in the cold—whether you’re a hunter or target shooter, or just enjoy going to the range—is a different matter from shooting when temperatures are comfortable enough for you to wear shorts and tennis shoes to the range.

Lynn Sherwood is co-owner and one of the lead instructors for Jackson Hole Shooting Experience and High Caliber Women in Jackson, WY. Sherwood had a long standing fear of guns until one day she realized it wasn’t the gun she was afraid of, but the bad guy behind the gun. That epiphany led her to become an instructor and strong advocate of the shooting sports.

Jackson can have freezing weather as late as the middle of May, and as early as the middle of September. That means a lot of cold days of shooting. Learning to deal with low temperatures when you’re shooting outdoors in Jackson isn’t optional; it’s mandatory.
When Sherwood has students coming in cold weather, she tells them to prepare like they’re doing anything else in the cold: dress in layers.

“Layering is key,” she said. “We work on an outdoor range that has a shelter overhead, but it still can get very cold. We encourage students to wear warm, closed-toed sturdy boots with socks appropriate to the weather instead of tennis shoes.”

Sherwood encourages her students to wear polypropylene thermal underwear during really cold weather. “Using that as an inside layer helps wick moisture away and keep them warm,” she said.

“A lot of our students have noticed that when their hands are cold, recoil hurts more, particularly if they’re shooting larger calibers,” she said. “A little padding in the gloves helps with that.” She said a lot of students keep chemical hand warmers such as HotHands® in their pockets to help keep their hands warm during lessons.
Sherwood also briefs her students about other weather issues.
“Because of our altitude, we need to protect ourselves with sunscreen even when it’s cool,” she said.

When students are ready to head for the range, Sherwood may start more experienced students with warm-up drills.
“What we do depends on the shooter,” she said. “If it’s a student getting a pre-hunt lesson, we will have her run from the parking area up the hill to the shooting area, and get her pack off her back. If she can’t get to her sticks, we have her place her gun on her pack. That helps her with breath control as she gets ready to take the shot.” During pre-hunt lessons students continue to move quite a bit during those lessons, which helps keep their body temperature up.
“Students who are taking skill development lessons also move around a lot,” Sherwood said, “which helps them keep warm. If we’re working with self-defense, we’re moving to and from targets and working with cover and concealment, so there’s a lot of movement in that.”

The kind of movement Sherwood has students engage in depends on their skill level.
“I’m not going to have them doing more intricate movements if their skill level isn’t there so safety is lacking; it has to be safety first,” she said. “But as they progress, they can be moving through targets and cover and concealment. That constant movement helps them stay warm.”

Bieker sometimes has students do a little exercise on the range.
“We have them jog in place or run around the parking lot,” she said. “Sometimes students who don’t want to run will do jumping jacks. We’re fond of anything that gets the heart rate up, because when you’re in an emergency situation your heart rate will be up and your adrenalin will be pumping. Another thing we really like is competition. When you get their competitive nature going and they really get into shooting, they kind of forget about the cold.”
A good bit of what they do at the Jackson Hole Shooting Experience and High Caliber Women, Sherwood said, is what they call a “luxury entertainment shooting experience.” She said this kind of a lesson is an exposure to 16 to 24 different guns during a 3-hour period. 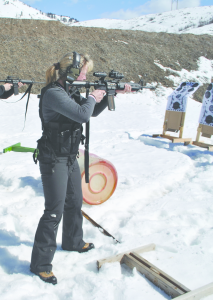 “These students usually aren’t moving as much, so we have a warming room attached to our shooting area where we can go in and have hot cocoa,” she said. “We go in there and load magazines and warm up. If the temperature is under about 15 degrees, then we typically look to reschedule. The shooters who come for that luxury entertainment experience usually are travelers, and a lot of them haven’t shot before, so we feel like the cold can become a safety hazard if it slows down their thinking and their trigger fingers. We want the experience to be comfortable and enjoyable for them, because if it’s not fun they won’t want to come back and explore the world of the shooting sports.”

Sherwood said their regular students generally don’t reschedule because of the cold unless conditions are really extreme.

“They’re doing serious skill development and they’re looking to protect their families,” she said. “If they’re living in Jackson Hole or the surrounding area, they need to be able to train in those conditions to know what it feels like. It’s kind of like stress inoculation, only it’s weather inoculation. They need to know the feeling in their fingers so they can find the trigger and know how hard to pull. We think it’s important to do year ‘round training for defensive shooters, because it’s a serious skill builder.”