Like fine wine, some guns just get better with age. Take the 1955 Victor Sarasqueta double barreled 20-gauge shotgun I bought from an ad in Shotgun News twenty or so years ago. The triggers still were crisp, the action tight, and the engraving immaculate. I used it for several years and then sold it to a competitive shooter who, I am sure, loved it as much as I did.

Marna Tracy, owner of Tampa Tactical Supply in Riverview, FL, said shooters buy used guns for a number of reasons.
“It may be a firearm with a limited production,” she said, “or a special gun that was the first gun you ever owned. Or you might want one to complete a collection.” Or if you want an expensive gun but can’t afford a new one, you might look for a used one you can purchase for less than the full retail price.

You can find used guns in quite a few places: gun shops, pawn shops, and gun shows come to mind. Then there are the websites such as Gunbroker (gunbroker.com), Guns International (gunsinternational.com), Armslist (armslist.com), Gun Auction (gunauction.com), and Guns America (gunsamerica.com). And publications such as Shotgun News are still around, with paper classifieds like the one where I found my Spanish double 20 years ago.

Transactions on websites can be very successful, and many gun purchasers find just the firearm they want online. Just like with eBay, websites such as Gunbroker have a rating system where buyers and sellers can leave feedback to let other users know what experiences they’ve had. While there are protections in place to guard against getting ripped off by unscrupulous sellers, I can tell you from personal experience that once in a while those protections don’t work quite the way we’d like to think they should. This is not to say that you can’t find and purchase some nice used guns online—I’m watching a lovely Spanish double right now—but keep in mind that there’s an element of risk any time you make a big purchase online from someone you don’t know.

Just the act of going to a pawn shop or some gun shows can be an experience in itself. Characters abound in both places.
“There’s a show a weekend in some places,” said Miles Hall, president of H&H Shooting Sports Complex in Oklahoma City, OK. “Some of them are like flea markets, with Beanie Babies and lots of other stuff. It’s like going to Wal-Mart late at night; it’s an interesting crowd.”

Hall encourages customers to consider purchasing used guns through an established brick-and-mortar retailer.
“They’re going to be there tomorrow,” he said. “It you have a problem with the gun you can find them, and you can talk to them face to face. An established store has a vested interest in staying honest, and they’re going to deal with you honestly.”
Let’s say, though, that you’re in a pawn shop or at a gun show and you see a used gun that you like. You have a hands-on opportunity to examine the gun and see if it’s really something you want to take home with you.

“The first thing to look at is the condition of the gun,” Tracy said. “Is it dirty? Dirt can cover things, but a dirty gun isn’t necessarily a bad gun. But if it’s dirty it’s especially important to take an extra look and see if you can see any cracks.”
Dan Bennett is the used firearms manager at H&H Shooting Sports Complex. He, too, said the external appearance of the gun is the first indicator of its condition.

“The overall appearance of the gun tells you something about how it’s been treated in its lifetime,” he said. “But there are some people who don’t necessarily clean their guns, so a gun can be dirty on the outside but all right on the inside. That’s something to look past. If it’s beat up or has a broken stock or grip, however, that may indicate that it’s been treated badly. In that case, you need to look a little deeper into it, either mechanically or the condition of the inside.”
Check to be sure the gun functions properly, and look for excessive wear and tear. 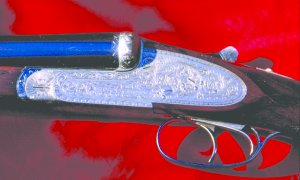 “If it has wear, is the seller representing it accurately?” Tracy said.
Regardless of whether you’re in a pawn shop or at a gun show, don’t take anything for granted.
“Do your due diligence,” Tracy said.
Bennett said he doesn’t have “degrees” of the condition of a gun he takes in as a used gun.

“I don’t rate guns as good, medium or bad,” he said. “I ask ‘Is this good enough for H&H?’ It either is or it isn’t. The ones we bring in have to be pretty sharp.” This illustrates very clearly the advantage of buying a used gun from an established gun shop; even though the gun is used, the shop has a reputation to uphold and won’t sell a piece of junk.

Don’t let the impulse to purchase a particular gun blind you to the price; just because a gun is offered for sale as used doesn’t necessarily mean it’s a good deal.

“At a recent gun show here, an accessories guy was selling his personal gun,” Tracy said. “One of my customers thought it was a really good deal until I did some research and showed him that the guy basically was trying to sell the gun for the same amount he paid for it.”

“I once had a lady come in with a .357 revolver,” he said. “She was just thrilled to death with having paid $380 for it. It was an RG revolver that sold brand new for about $80. She had gone into a pawn shop and just decided that was what she wanted, and someone took great advantage of her.” 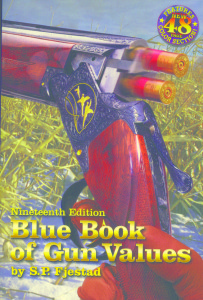 Which brings us to The Blue Book of Gun Values. This guide, published by Blue Book Publications, is updated regularly with new values for used guns. This is the gun industry’s overall best reference for what used guns are worth.

The other good source for gun values is the online auctions. Search the auctions and find guns of the same make and model you’re considering and look to see what they actually are selling for. This will give you a good idea of the true value of the particular firearm’s worth.
“Compare as many of them as you can,” Bennett said. “Come up with a median of what that gun is worth.”
Regardless of whether you purchase a used gun from a gun shop, pawn shop or an FFL at a gun show, you’ll have to submit to a background check the same way you would in a regular gun shop. The one exception to this is when you purchase a gun from an individual, either privately or just walking around at a show.
A used gun can be a great investment, a wonderful collector piece, or a classic working gun like my Sarasqueta. Before you purchase a used gun, choose who you buy it from, inspect it carefully, and research its value. Consider the purchase of a used gun just as carefully as you do the purchase of a new one and you won’t go wrong.