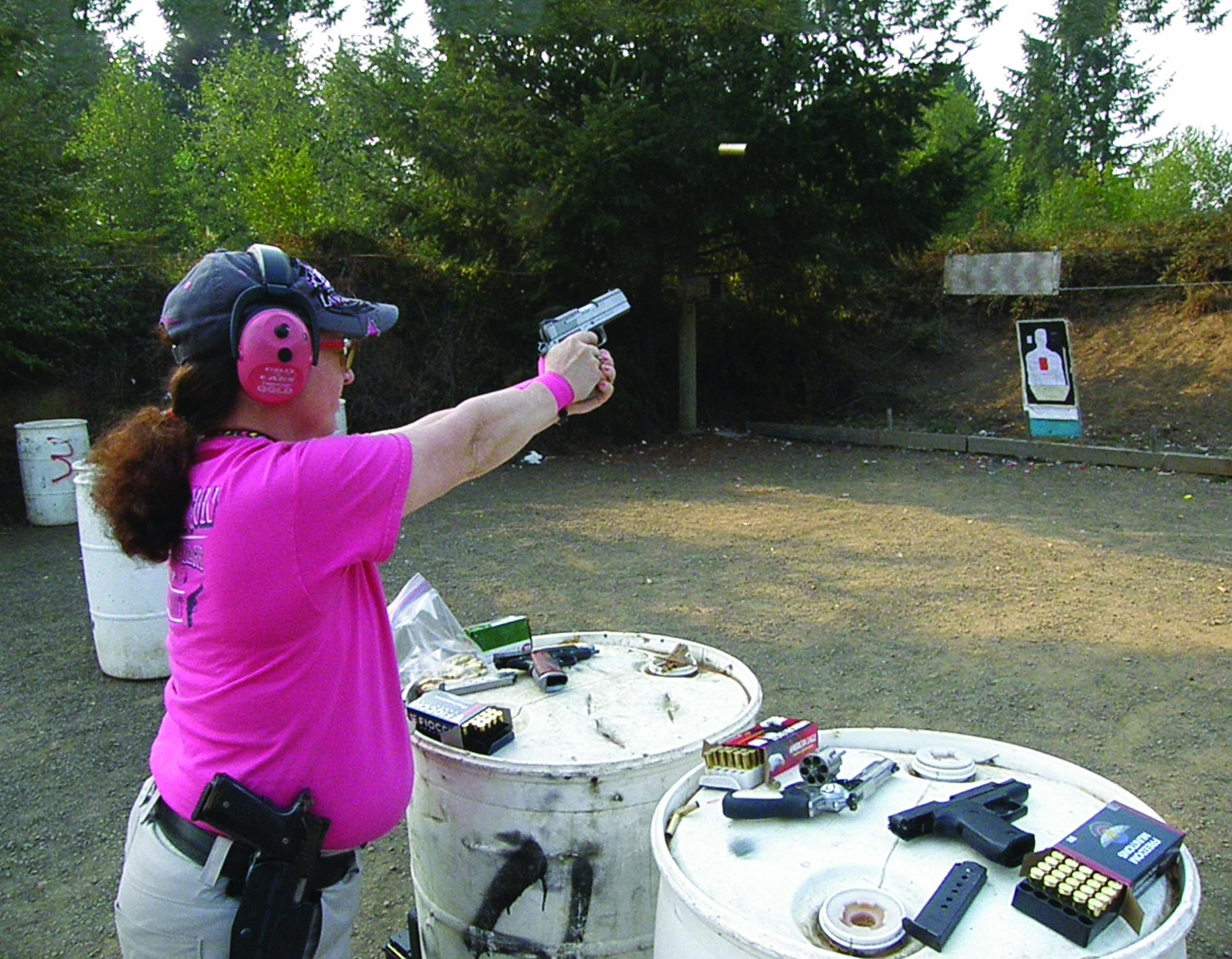 Many self-defense shooters sing the praises of the .357 magnum cartridge as an effective fight stopping round. A well-designed hollowpoint bullet with a weight between 125-158 grains propelled by a lot of powder to high velocity (usually over 1200 fps) is an excellent balance of mass and speed to carry significant energy into a threat. Unfortunately, as a revolver load, it can also deliver punishing recoil to the shooter, especially from a gun small enough to be concealable for carry.

Dan Coonan decided to see what would happen if he modified the classic 1911 semi-automatic platform to chamber and fire the .357 mag cartridge. As the revolver cartridge is much longer and has a different rim design than those used in semi-automatic guns, his work was cut out for him and the Coonan team. Feeding and extraction were the major issues to be worked out before the gun could be reliable and it took a number of years to come out with a product that was workable. I spoke to Dan and his people at SHOT Show 2015 and put in a request to try the gun. I requested the compact model, in order to compare it with my own carry-sized 1911 guns for concealability. By the time my sample arrived, I had a number of shooters in line, eager to try it out. 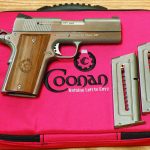 The Coonan has the look of the 1911 with a few distinct differences. Most people notice the width of the grip first. It is significantly deeper front to back than your usual semi-auto because of the need for a magazine that can hold the longer revolver rounds. The first thought that comes to mind is: “Will I be able to get my hand around that and reach the trigger?” Turns out, nobody had a problem

with this, regardless of hand size.

And, speaking of the trigger, that’s a second difference. The Coonan trigger is not the traditional bow-style design of most 1911s. It’s hinged and set well back in the trigger guard to accommodate reach. Though it isn’t the normal curved solid bar, it has the short travel and crisp break prized by 1911 enthusiasts and a reset that is cleaner and more distinct than most guns in its category. My sample gauged for me at an average of 5 lb. of pressure to break. Every shooter that tried it, from expert to novice, remarked on how nice the trigger felt.

Another remarkable feature was the way the gun was presented. It comes in a very nice zippered Cordura case with cut-outs for the gun and two magazines. Also included was a little aluminum tube with ear plugs in it that is attached to a bar that acts as a magazine loading aid. A storage lock came with it. Also a bottle of lube and an allen wrench to help with reassembly. The literature included with it was refreshingly honest as well. A yellow sheet warned not to shoot the gun without lubing it first. Also mentioned was a 200-500 round break-in period to ensure reliability. I’d never had a gun come in with a lubrication warning in bold print on a bright yellow sheet. Before taking the gun to the range, I disassembled it and lubed it the same way I lube my other 1911s, though a bit heavier than usual because of that warning sheet.

The method for disassembly was explained very clearly in the owner’s manual. My one complaint being that a bent paper clip was suggested as a makeshift tool to trap the recoil spring assembly instead of the manufacturer including a wire tool for the job. I stole one of the wire tools from our collection that services our Kimbers. Paperclips are very hard to unkink well enough to work in tight spaces. Even the slender Kimber wire had to be modified to allow for reassembly. Otherwise, the procedure was very like any 1911 disassembly. The oversized slide catch/release lever was easy to work with. 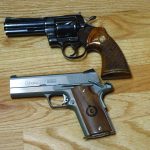 On a side note, this slide release was the only way to run the slide forward from the locked position to chamber a round for firing. As we teach a vigorous overhand rack to run the slide administratively, this feature took some getting used to. 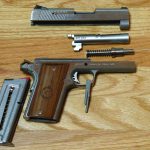 As another point of honesty on the part of the manufacturer, they come right out and say that this gun is not designed for beginners. While many instructors agree that no 1911 is really a beginner’s gun due to its short, light trigger and necessity for very strict safety discipline, very few makers of these guns are up-front about handing out that caveat. Kudos to Coonan for saying it out loud.

The gun was well made and solid. The slide and frame of the assembled gun were deeper top to bottom than is standard for the 1911 so none of my holsters would fit it. With a properly fit holster, though, it should be comparable in concealability to any other commander- sized 1911 (mid-sized, 4-in. barrel). Its flatness would definitely tuck away easier than a 4-in. barreled revolver. The magazines hold 6 rounds each and are of a non-standard depth that would require a custom magazine pouch for carry.

To be fair to the sample, I decided to work some break-in rounds through it in a couple of different bullet weights before testing it for accuracy. During the first range session, I quickly discovered that the gun needed even more lubrication than I had given it to cycle reliably. I had used my favorite CLP lubricant for the job. We broke out the little bottle included with the gun and generously doused the rails and barrel lugs. After that, the gun ran much better. Both 125-gr. loads and 158-gr. loads ran well, though there were a few instances of the slide bouncing out of the catch on the last round and coming back forward enough to trap the magazine until the slide could be locked back again and the magazine freed. It would be my guess that the springs were tuned for the average 125-gr. loads and sometimes heavier powder loads would not be slowed enough by them to reliably catch. 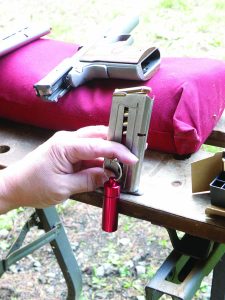 The gun had good accuracy out of the box, though it shot low for my expert shooters. Perhaps the front sight stands a bit too high and needs adjustment.

I ran an event for the local chapter of A Girl and A Gun in which a battlefield pick-up exercise was included. I put the Coonan on the line next to a Ruger GP100 revolver with a 4-in. barrel and had the ladies compare recoil and controllability with the same 158-gr. load in both guns. Even though the Ruger was custom-tuned, all of the shooters preferred the Coonan for shootability of the stout .357 mag. round. Some of the ladies had never shot such a heavy caliber before and didn’t think they could control it. The Coonan was a pleasant surprise to them and they left with smiles on their faces. A fellow instructor that is a dedicated revolver lady fell in love with the Coonan as a wonderful platform to shoot stout defensive loads without so much recoil punishment.

By now, the Coonan had over 200 rounds through it and it was time to test accuracy. I cleaned it and laid on a generous layer of Coonan’s included lube and took it out to 25 yards with a collection of defensive loads of various weights. I ran 5 round groups from a seated position with the gun braced on a sandbag. Table 1 shows average groups for 5 rounds and the best 3 of 5 to get a better idea of what the gun, rather than the shooter, is capable of.

In addition to the 25 yard test, I had an expert shooter shoot the gun from roll-over prone position at 50 yards for two six-round groups, one with 158-gr. and one with 125-gr. loads. His group centered about 18-in. below point of aim with 8 out of 12 shots in a 7-in. group. Pretty good for a handgun at that distance, sight elevation adjustment notwithstanding.

Everyone that tried the Coonan enjoyed the experience. A heavy defensive caliber was made pleasant to shoot and a lot of money could be spent on ammunition just to hear the thunder and watch the fire shooting out of the barrel. The Hornady American Gunner loads were very hot and gave an impressive muzzle flash!

Reliability even after about 300 rounds is not where I would need it to be to bet my life on the Coonan as a carry gun. A little tweaking and some more break-in might remedy that. It can be argued that 6-round magazines don’t really boost capacity enough to give an advantage over a revolver. I would say that the recoil control and quicker loading and unloading would negate that. The Coonan would also be more easily concealed for carry than a revolver with the same barrel length.

I would agree that the Coonan is not a beginner’s gun. It takes more attention to care and cleaning than other semi-automatic guns. Clearing malfunctions is a bit more difficult with the revolver cartridges as the rim tends to get hung up on the extractor claw pretty easily on a stovepipe or other failure to extract situation. It’s also ammunition sensitive. The load has to be hot enough to run the action through a complete cycle. The springs are tuned to best run the 125-gr. loads which are, arguably, the range of most good defensive loads. This tendency to be finicky is something to which the revolver isn’t prone.

The Coonan I tested was the compact model with the 4-inch barrel. Most Coonan models are 5-in. guns. These standard size guns come with a set of springs that will allow the gun to run .38 Special ammunition. The compact does not. Though it will load and fire that caliber, it will not cycle the action.

All in all, the Coonan is an appealing choice for those shooters that love the .357 mag. cartridge but are semi-auto fans. I have to admit that I’ve never had more fun shooting that powerful and venerable load than I had with this gun. The uniqueness of the concept also appealed to my quirky nature. It’s a gun with a serious “cool factor.”

The Mossberg FLEX system is a best kept secret