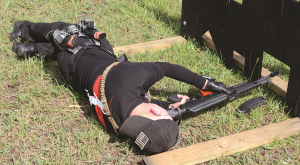 If you’ve ever watched a friend train with her significant other, you already know how challenging it can be. She knows what she wants to do; he thinks she should do something different—neither one of them listens to the other one. It’s a challenge Bob and Jolyn Esquerre, owners of Identify Point Fire in Boca Raton, FL, know very well. As a husband and wife training team, they’ve not only trained couples together, they have experienced some of the same “couples dynamics” that their students have.

The thing that’s common to couples such as these, Esquerre said, is that the husband often knows more than the wife.

Esquerre said he and Jolyn do the same thing when they train together.

“We often won’t listen to each other, and we have to get Rob Pincus (developer of the Combat Focus Shooting program) to arbitrate for us,” he said. “It’s really hilarious. That’s one reason couples come to us; they know we go through the same thing so we have instant credibility.”

The trick to training together as a couple, Esquerre said, is that both partners need to learn to respect each other’s skill sets.

“That’s the key,” he said. “The man tends to have the attitude of ‘I’m the guy and therefore I know.’ That often intimidates the woman, who is more precise and wants to get it right. Once she gets it, she does do it right; she shoots better than her husband. I don’t know if that’s gender specific or relationship specific, but the woman in a couple tends to want to be very exact. She will say, ‘Tell me what I’m doing wrong and tell me how I can fix it. Then tell me when I do it right.’ It’s one-two-three.”

The Esquerres also are personal trainers, and they see the same phenomenon in the gym environment.

“The man is stronger but the woman has better technique,” Esquerre said. “She wants to be exact and precise.”

Esquerre said that in the training environment, women tend to listen to their instructors better than men do.

“They have to overcome more obstacles,” he said. “Guys tend to know it all. For instance, I’m training a man right now who has the wrong gun from a personal self-defense standpoint. I can’t tell him that, even though I know what he’s going to do wrong. Once he does it wrong, he will realize it’s the wrong gun. I just have to let him do what he has to do, and I know he’s going to mess it up. When he messes up, his acknowledgement of that will make him want to listen.”

Esquerre said the dynamic in the reverse couples situation—where the woman is more experienced than the man—is pretty fascinating. A couple of years ago, he watched another instructor training one woman who had multiple black belts in the martial arts.

“She had a different mindset,” he said. “He showed her one time and it was done; she didn’t even ask any questions. She was pre-conditioned to pick things up very fast.”

Then the instructor and student turned things around.

“She was instructing him about some things in the martial arts,” Esquerre said. “He wasn’t as fast to pick things up, and she had to be patient with him. She was more advanced than he was because of where she came from.”

One of the ways the Esquerres teach couples is to separate them. If they’re in class together, they put the man at one end of the room and the woman at the other end. If it’s a private session, each of the Esquerres takes one partner and they go in different directions.

“We separate them initially, and once we see the dynamics changing—which may take four or five sessions—we put them back together,” Esquerre said. “What we’re looking for is mutual respect.”

Each couple is unique, Esquerre said. He trained one woman who then brought her husband to training.

When the couple first came to training together, the Esquerres separated them on the range until they could really work together.

“They’re some of my best private students now,” Esquerre said. “They really respect each other’s strengths and weaknesses, and really encourage each other. When they work together, they really work well.”

Part of what makes the Esquerres such effective trainers for couples is their very different personalities.

“Most of the time, Jolyn takes the wife and I take the husband,” Esquerre said. “But if we see that the husband will work better with a woman, we switch; Jolyn works with him and I work with the wife. Jolyn is 72 and most of these guys are in their 40s. She’s like a mother hen, and she will put up with nothing, so they respect her. When she finishes working with a man, she has whatever they were working on solved.” 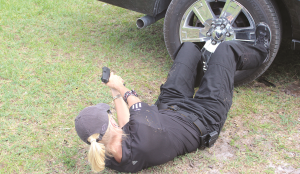 At the end of the day, Esquerre said, the dynamics of a couple are really critical to their effective training.

“If someone breaks into their home, they have to work as a team,” he said. “It’s not like, ‘You run into that room and I’ll defend you.’ They have to defend each other, so they have to cooperate and have a game plan. The extent to which they respect each other determines how well that game plan works.”