A psychiatric group complained that fashion designer-manufacturer Kenneth Cole’s gun control billboard posted in New York City is off target and it wants him to take it down. Curiously, there has been little reaction so far from gun rights activists.

CNNMoney reported that the American Psychiatric Association (APA) slammed the fashion designer on Sept. 3 for a billboard that read: “Over 40M Americans suffer from mental illness. Some can access care…All can access guns.”

The message was signed “Kenneth Cole” and included the hashtags #gunreform and #are-youputtinguson.

The sign looms over Manhattan’s busy West Side Highway and the APA wants it removed.

The APA is not the only mental health voice raised against Cole, who has a long history of provocative Tweets that have stirred controversy. 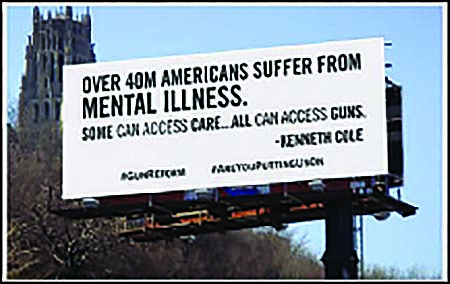 According to CNN, APA President Dr. Renee Binder said the billboard message is detrimental because it incorrectly links mental illness with gun violence and the need for gun control, a theme that has long been popular with many politicians.

In response to the roadside sign, the APA tweeted a series of messages expressing their disappointment in Cole.

Cole, who did not respond to the APA’s tweets or to CNNMoney’s requests for comment, tweeted this message later: “This ad not meant to further stigmatize those suffering from mental illness community in need & already under-served.” #MentalHealth.”

Gun control is not the first social issue Kenneth Cole has taken a stand on, nor is this the first time he’s received criticism for his comments.

Cole has voiced support for liberal issues such as equal pay for women and marriage equality, but has received substantial backlash for tweets he made about Syria and Egypt.

In 2013, during the debate over America’s possible engagement in the Syrian civil war, Cole used his personal account to tweet: “‘Boots on the ground’ or not, let’s not forget about sandals, pumps and loafers. #Footwear.”

In 2011, when deadly protests broke out in Egypt, Cole tweeted: “Millions are in uproar in #Cairo. Rumor is they heard our new spring collection is now available online… -KC.” The tweet, which included a link to the company website, and the initials KC signified that he wrote the tweet himself.

Themighty.com reported that mental health advocates say this perpetuates the stereotype that people with mental illness are violent.

“We’re sick and tired of the stigma associated with our illness,” Dolores Sanchez, mental health advocate and founder of the website Mental Health Justice told The Mighty. “If they’re trying to send the message that we want more accessibility to mental health care, this is a warped way of promoting it.”

In a blog post featured on her website, Sanchez called the billboard a “sensationalized portrayal” and quoted Dr. Jeffrey Swanson, a professor in psychiatry and behavioral sciences at Duke University School of Medicine, who said, “If we were able to magically cure schizophrenia, bipolar disorder and major depression, that would be wonderful, but overall violence would go down by only about four percent.”

Ultimately, Sanchez wants the billboard to be taken down and for Cole to issue an apology to the 40 million Americans who live with mental illness.

“[The decision to retweet] was simply a reflection of our firm belief that mental health care should be more readily accessible than guns, not to shift any blame to mental health,” he told The Mighty in an email.

Apparently, it’s all part of Cole’s plan to exploit the public desire for controversy to his own ends—and he freely admits it.

In an interview for Details Magazine a couple of years ago, Cole was asked about a 2011 tweet that used the escalating riots in Cairo to promote a new spring collection. That tweet, like the “Boots on the ground” Syria tweet, prompted an enormous amount of backlash.

Cole, who confirmed that he writes most of the tweets on the @KennethCole account himself, including the Egypt tweet, described his Twitter strategy as attempting to say something offensive in order to get exposure.

“Billions of people read my inappropriate, self-promoting tweet, I got a lot of harsh responses, and we hired a crisis management firm,” Cole told Details. “If you look at lists of the biggest Twitter gaffes ever, we’re always one through five. But our stock went up that day, our e-commerce business was better, the business at every one of our stores improved, and I picked up 3,000 new followers on Twitter. So on what criteria is this a gaffe?”

“Within hours, I tweeted an explanation, which had to be vetted by lawyers,” he added. “I’m not even sure I used the words I’m sorry—because I wasn’t sorry.”

In response to a question about his brand’s fashion statements versus its marketing messages, Cole told Details that he purposely ups the ante on social media and ads, while keeping the fashion more toned down.

“We’re clearly bolder with our social messages than we are with our fashion messages, and that’s by design,” said Cole.