When I first picked up a copy of, “Surviving a Mass Killer Rampage: When Seconds Count, Police Are Still Minutes Away” I honestly did not know what to expect. I had never read any of Chris Bird’s books before and had only heard his name mentioned in conversation. The title of the book intrigued me. It is hard to miss the mass killings that happen in the news. If you read the newspaper, watch television, or even talk to other people there is no way to avoid the conversation of what to do about these horrible tragedies. Nor should it be avoided. It seems to dominate the news, and there is always an outpouring of support for the victims and their families, as well as a call to action on how exactly to stop the killings from happening again. Often times the average person only hears the same details about the mass killing over and over again. This is not the fault of the individual so much as it takes time to collect all the facts, gather statements, and examine it in-depth. Unfortunately, people tend to lose interest and come to their own conclusions about how to stop these tragedies before they know all the facts. If you read this book for no other reason than to find out how mass killings happen from start to finish, then you would not have wasted your time. The attention to detail and facts in the accounts of the mass killings are well organized and clear. Which would come as no surprise considering Bird’s work as a former crime reporter. 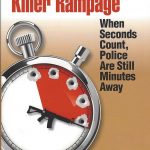 This style of writing sets the scene of the tragedies and gives you the personal accounts of those involved. You see the responses and reactions of the victims which helps you better understand their thought processes and the effect it had on their lives. You feel yourself gaining an understanding of the tragedies that cannot be conveyed through a 30-second news blurb or a newspaper article. After giving insight into the tragedies he goes on to highlight what should be done when forced to face these killers.

There are many documented cases in which fighting back has saved many lives. The account of Jake Ryker from Thurston High School was one such example that really stood out to me. He was an unarmed student that put his life on the line to save others by tackling the shooter. He remembered what he had been taught about firearms and was able to use that knowledge to cause the Glock 9mm that the killer was using to jam after one shot, potentially saving a number of lives.

The book then goes on to offer a solution to stop these shootings, through training teachers and having people around that are well trained that can react quickly to the situation. As you might have guessed from the phrase title “…When seconds count, police are still minutes away” there is an emphasis on the importance of stopping the shooter as soon as possible. The quicker you are able to respond and stop the shooter the more lives you will save.

Bird goes on to offer the opinion that the best course of action is to fight back against the killer as fast and effectively as you can. Encouraging proper firearm and response training for teachers, as well as private citizens, lowers the death toll and potentially stops these attacks before they can start. This also goes hand in hand with the idea of the ineffectiveness of gun-free zones in regard to stopping mass shootings, which leads the reader to the conclusion of ending Gun free zones. The final few chapters of the book focus on “radical Islam” and terrorist groups who have the goal of destroying western civilization through either “lone wolf” attacks or well organized strategic strikes on large numbers of people. Showing the difference between the two with detailed accounts of the most recent attacks, Bird then goes back to the idea that if we want these attacks to end we need to fight back. “The solution to terrorist attacks is to fight back” on Pg. 349

Overall this book was an information gem. The detailed accounts of the shootings and attacks in this book allow the reader to learn from past tragedies and know what to do if you find yourself in the middle of a mass killing, whether you are armed or unarmed. This information is something that every responsible gun owner should know. If you are worried about mass killings or if you just want to become better educated on the issue, I would suggest reading this book. Bird has done an excellent job of laying out the facts in a way that keeps the reader engaged and wanting to learn more.