During SHOT Show 2013, an interesting gun was generating quite a bit of buzz at the Media Day shoot. It was a 12-gauge gas operated shotgun set up like an AR-15 rifle. It was box magazine fed and had all the controls in the same configuration as America’s Rifle. The gun was the Akdal MKA1919, imported from Turkey by RAAC. At the RAAC booth, an American company called Firebird Precision was showing off their conversions of this gun. In speaking with Nanci Lambert of Firebird about how she enjoyed shooting the gun in 3-Gun competition, my interest in this 12-gauge platform as a gun for women was piqued. I decided to get my hands on one. 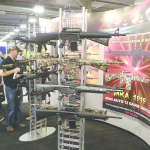 The Tac12 that I acquired started life as the Akdal MKA1919. Typical for Americans, Jim and Nanci Lambert of Firebird set out to tweak and improve the platform with 3-Gun competition in mind. The Tac12 has Firebird’s own machined aluminum version of the lower receiver fitted to the original MKA1919 upper and barrel for a sturdier platform. During extensive testing of the MKA1919, Firebird discovered all the aspects of the original design that could be improved and set about making the gun their own. At the time of this writing in 2014, Firebird Precision is offering the Tac12A1 which is made entirely in the USA by Firebird. That evolution of the gun was not yet available when I started my quest to test one.

Firebird offers many customization options for the Tac12. As with an AR-15, there are many fore-end and stock options to chose from. The test gun came with a flattop aluminum ventilated fore-end. Full upper and lower rails were included with the unit and it is drilled for side rails as well should the shooter choose to add them. The Blade Entry Stock was the shortest option they had with an 11.5 inch length of pull (distance from the butt plate to the trigger face). It, too, is aluminum, skeletonized to reduce weight. Though Firebird offers LimbSaver butt pads, this gun did not include one. I was assured that, despite being a 12-ga. shotgun, the recoil was so manageable as to not really necessitate adding about half an inch of length for a recoil pad.

My experience has shown that, for me, the shorter the length of pull, the better for maneuverability and control of a long gun. The gun will also fit more shooters shortened than at a more standard 13- or 14-inch length of pull. Even many long-armed shooters prefer the advantage a short stock gives in keeping the gun’s center of balance closer to the shooter’s body in the power zone of the arms.

Another fun custom touch is the option of adding a hydrographic film finish on the aluminum furniture that could be pretty much anything the owner desires. Firebird had some camouflage offerings on display, of course, as well as some flashy flames or other graphics. The color choices are about endless. The test gun is done in a smoky burlwood design that’s friendlier than the all-black basic finish. This is where one can show off a bit of personality that makes a custom gun more interesting. 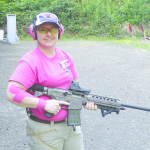 The Tac-12 came set up for a right-hander, with the side-mount charging handle on the left and an oversized magazine release button on the right. The bolt lock/release is in the usual left side position, as in the AR-15 rifle. The safety is ambidextrous. The trigger has a solid, broad face. My sample gauged for me at an average of 5-1/2 lb. pull weight. The break is clean and the re-set distinct.

The main difference between this shotgun and the AR-15 platform, and one that is a bit of a challenge, is in the take-down procedure for maintenance. It isn’t as simple as releasing two pins to separate upper from lower. The manual for the MKA1919 was little help with the hybrid from Firebird. Fortunately, they referred us to videos posted on their website and on YouTube that show Jim Lambert demonstrating the procedure. As Firebird’s evolution of this shotgun platform continues, they will post updates regularly on both their hybrid and house-manufactured models of the Tac12 and Tac12A1 respectively.

We set up the Tac12 with an EOTech 512 holographic sight and a Magpul AFG-2 foregrip and took it out to sight in with slugs. We used Fiocchi reduced recoil, 7/8 oz. slugs, as recommended by Firebird, and were placing them in a palm-sized group at 50 yards with the shooter in a braced seated position. More good news for the shooter is that this gas gun is set up to run on low brass loads, unlike some more finicky gas guns that won’t cycle with low recoil shells. The Tac12 cycled reliably with light 7-1/2 birdshot as well as the slugs. 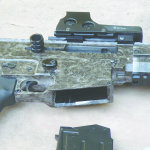 On steel poppers with birdshot, the gun ran fast and smooth. Re-coil was amazingly gentle and straight back into the shoulder pocket, making it feel about like a 20-gauge and handle like a dream. No recoil pad needed! Holographic dot on popper, shoot, and move to the next. It was like cheating! I can see why this gun is a hit with the 3-Gun crowd. The crossover in positioning of the side-mount charging handle, safety, magazine well and mag release would simplify transitioning from rifle to shotgun tremendously.

I offered the gun to some of my lady shooting buddies to try and offer their opinions. Every one of them got a big grin on their face after shooting it. Not a one of them complained about recoil. As easy as the Tac12 is to shoot and handle, it would be an excellent competition gun. It also has great potential as a defensive tool. Training with it wouldn’t beat the shooter up and could be done with the cheaper, low brass loads.

Firebird Precision is, as of yet, a small custom house so acquisition of one of these guns would be easiest done by contacting the manufacturer directly via their website at firebirdprecision. com. Though one would need to save up to acquire one of these shotguns, a serious competitor in 3-Gun or an AR-15 enthusiast would find the gun a joy to own and a pleasure to shoot. And for self-defense, I find it an amusing response to a certain political entity that stated publicly—“You don’t need an AR-15! Get a shotgun! “Get a shotgun!”Becoming proficient with it as a tactical defensive gun would be very much like training with an AR-15 rifle, more fun than work. And when loading is as easy and quick as changing magazines, it is a formidable tool to have on your side for home defense. The shotgun’s versatility in ammo choices is always a defensive plus and the box magazine delivery system would make it easy to set up defensive loads in any way the shooter deems best for their situation. This gun comes with a custom price tag, putting it in the high end for gas-operated shotguns with the base price of $2440 for the hybrid and an MSRP of $1900 for the Tac12A1 version.