Applying Target Shooting to the Real-World

We all have to start somewhere. Firing at paper targets and making small groups is satisfying. But groups do not save your life. Hits quickly delivered save your life. Gunfights are dynamic. People move. If the assailant closes the distance he can hurt you. Pulling the trigger until you are no longer afraid is the tactic that most understand but this is far from an acceptable plan of action.

When I began working up the details of this report I did not simply look into my past training programs. I attempted to learn new things and to be double certain my beliefs were correct. One fact remains constant—shooting small groups will not save your life. Target shooting is where we all begin to learn the basics of marksmanship but we must move past those basics. The gun press relies upon firing groups to gauge the accuracy of a handgun and to compare similar handguns to the other. This is all fine for comparison as it speaks to us concerning barrel fitting and quality of construction. But combat shooting doesn’t revolve around firing small groups. The only shot that is really important is the shot you are firing at the moment. Every string of fire should be considered a series of controlled shots, with each shot intended to hit the target. 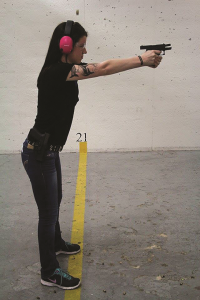 You should practice consistently in dry fire, cling to sound principles on the range, and continue to learn close quarters techniques. Defensive shootings are unpredictable. Our training should be flexible. The shooting skills we possess must be effective in low light, at close range, at moderate range, from behind cover and when moving. If you cannot quickly address the target in a range setting you will never succeed in a defensive situation against a motivated adversary. For peace officers the shooting technique they have learned must work in uniform and from concealed carry. You must develop skills that are flexible and in doing so you must have a fighting system developed that is both flexible and effective no matter what the attire. The primary focus on learning any drill is getting the firearm into the firing position. You practice drawing the handgun from concealed carry. You must do so effortlessly without taking your eyes from the threat. Threats move and taking your eyes away could mean they disappear from your vision. They may take cover or move into an advantageous firing position. 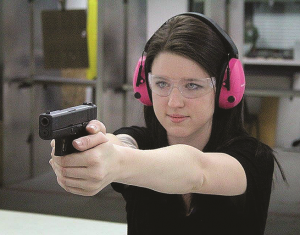 Training for any task is goal oriented. You do not go to college without a plan, without the eyes on a degree. You do not study haphazardly. By the same token when you work out at the gym you have a certain goal in mind and do not simply wander from one machine to the other. You must not only have a training plan in place, you must have a means by which to measure progress. You should not simply travel to the range to make brass. While firing the handgun may build familiarity you should be practicing a skill that is needed for personal defense.

A cornerstone of marksmanship is dry fire. Begin with a triple checked unloaded firearm. And check the firearm every time you lay it down. Dry fire doesn’t cost anything and may be practiced in the home. Always aim toward a backstop that would stop a bullet—just in case. You must be consistent in controlling the trigger.

Your body will acclimate to the shooting stances and the muscles needed to control the handgun and the trigger. You are practicing only one aspect of marksmanship and that is the trigger action—although you should incidentally control the sights as well. Let’s get one fact out of the way—you cannot duplicate the stress and horror of combat on the range.

The New York State Patrol once had a program in which officers ran one hundred yards before firing and also used a “smoke house.” As a young officer reading of this training I was impressed. No doubt their present day training is even more advanced. If you take competition seriously IDPA matches are an excellent training field. The point is you can practice but you cannot replicate adrenaline dump, constriction of the pupils and auditory exclusion, all of which occur during a gun battle. Another point to consider—your body will behave differently in one incident to the other, depending upon the stress level, the toll the day has taken on you and perhaps even the amount of coffee you have put away. A drunkard that is panhandling is bothersome but an armed team is a deadly threat. That is why you need to get into a persistent training program. You will fight as you have trained. 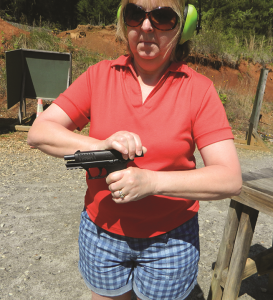 If you mix up your disciplines during training you will revert to the simplest program during a gunfight because your body tells you it is the easiest. I do not mean that you should not practice different drills. When you are firing at close range, long range, firing at multiple targets, or firing in a failure to stop drill, always use your sights, the same sight picture, the same trigger press and the same grip. If you sometimes fire with one hand or sometimes point the gun rather than aim, you may revert to this type of shooting at the wrong time. Use the discipline that supplied hits and stick with it. 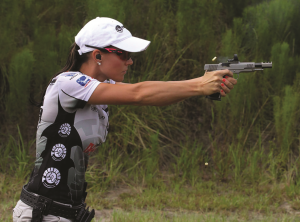 The shots that miss are shots that are wild in the community or even among your family. As one great gunner of the past said, “Speed is good but Accuracy is final.” I cannot agree more. Work to achieve accuracy first, then work with speed. Speed isn’t something miraculous that occurs one day. It is the result of the proper implementation of technique that results in the elimination of excess movement. Affirming the grip as you draw eliminates fumbling with the grip and readjusting your hold on the handgun during movement. Executing the presentation from concealed carry with a minimum of movement results in greater speed. Quickly achieving the sight picture and sight alignment and applying the trigger press consistently each time you fire results in less jerking of the trigger and misalignment. Hits are achieved and so is speed.

There are several rules that must be followed at all times as your training progresses:

The only shot that is important is the one you are firing.

Do not endlessly repeat only the drills you are good at. Attempt the most challenging drills. Do not get too complicated. Study one stance. If you find the isosceles fits your needs best, then adopt that stance. I began with the Weaver stance and still find myself using it; it would be a difficult change. Adopt, not adapt, and use the stance that works best for you. Give each an honest try and then use it at every firing session. Once you realize that target shooting will not save your life you are ready to address the real issues.