An August Washington Post online feature detailed a campaign by anti-gunners to remove a realistic looking gun emoji from the cyber world.

Emoji’s are pictorial images, often cartoonish, which depict “emotions” or thoughts and are used in texts or emails in place of a word or words for emphasis. Perhaps the 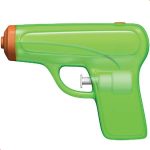 most famous is the ubiquitous smiley face.

The Post began the story, “Gun control measures have stalled in the legislature repeatedly. But there does appear to be one place where gun control is catching on: the ever-more-political world of emoji.”

On August 1, Apple announced that the next update to its emoji catalog would style the “gun” icon as a toy, rather than a pistol. That follows the recent, unusual decision by the Unicode Consortium,

the tech industry group that approves emoji, not to include glyphs of a rifle and a man shooting a pistol in its next release, the story continued.

“If guns are to be controlled, then they need to be marginalized, not mainstreamed,” said Gill Marshall-Andrews, the head of the U.K.’s Gun Control Network and one of many advocates cheering the disarmament of emoji. “I think it’s a good move to take them away … It’s a small step, but it says something,” in the story.

Meanwhile, in the U.S., the Post story continued, the nonprofit New Yorkers Against Gun Violence has spent the past year waging a high-profile PR campaign against Apple’s pistol emoji. The campaign, called #DisarmTheiPhone, urged Apple to nix or redesign the icon in order to draw attention to the toll of gun violence and continued

legislative inaction. While Apple has declined to release any statement on its new pistol emoji design, making it unclear what prompted it, NYAGV has already taken some credit.

“We welcome Apple’s decision to dump the pistol emoji,” the organization’s executive director, Leah Gunn Barrett, said in a statement. “We believe that Apple, a socially progressive company, was influenced not only by our campaign last summer but also by the horrendous toll gun violence continues to take on American society, with over 33,000 dead and 84,000 maimed each year at a cost of $229 billion.”

Gun-rights advocates shouldn’t fret too much, the Post said, explaining that the very moment Apple was disarming its gun emoji, one of its competitors was doing the exact opposite. Microsoft has long represented the “gun” emoji as a toy on its devices; in the Microsoft 10 Anniversary release, however, the character will become more realistic.

“While this story seems ridiculous on its face,” he continued, “it raises alarms about the totalitarian mindset behind this kind of decision. This is no longer just about the Second Amendment, it’s about First Amendment rights, too. It shows that the gun prohibition lobby is so strident that they want to ban images of fake guns.”

“Maybe gun owners should think twice about buying any more Apple products,” he concluded, “unless they include a rotten Apple emoji.”