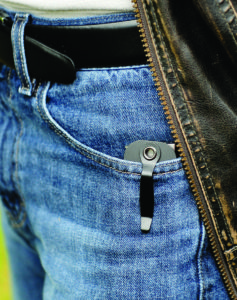 There are some immutable truths in this world: the only constant is death and taxes; never spit into the wind; it’s not if your hard drive (solid state drive) will fail, it’s when; and, if you carry a semi-automatic pistol for self-protection, you need to carry a spare magazine.
We all know we need to carry a second magazine―but where? Some are stuffed in the bottom of a pocket or purse, others are carried in an inside or outside the waistband holster.
If in the former, that mag just naturally migrates into the least accessible location and position. At the same time, some portion of the detritus you’ve painstakingly accumulated over the past eleventy-years, possibly including the Dead Sea Scrolls, will migrate into the magazine and work its way around the cartridges. Semi-auto cycling will not be enhanced.
Holsters tend to be bulky, need to be put on and taken off, and are not the most convenient. Also, they usually require wearing a belt.
Sometimes you look at something, stop, smack your head with your palm, and say―“Why didn’t I think of that?” Well, that’s what makes the select few entrepreneurs and inventors. And the folks at SnagMag invented a better way.
Their Concealed Magazine Holster is semi-skeletonized, and made of Boltaron, a plastic that’s giving Kydex a run for its money in the holster business, and many prefer.
The SnagMag is carried in the non-dominant side front pocket, with the magazine inserted bullets forward. As shown, there is a clip which holds it in place and prevents it from diving into the depths of your pocket, and looks to all the world like you’re carrying a pocket knife.
The SnagMag is slid to the extreme outside of that pocket. To draw your magazine, your index finger goes into the pocket along the front of the magazine, and applies rearward pressure as the mag is drawn upward. The thumb should also be placed onto the magazine.
This forces the “snag” into the pocket edge, allowing the mag to pull free of the SnagMag, which remains in the pocket. If they both do come out together, just drag the “snag” over your belt to pop it loose. 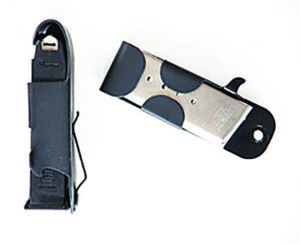 You will need to practice to do this smoothly and consistently. I did it about a dozen times (being a belt-holster person), and had it locked in. As Christine Rogers, the President of SnagMag LLC said:
“We encourage practicing the draw, as it requires a rearward motion so the built in snags have a chance to catch the back of the pocket’s fabric. This holds the holster in place while drawing the magazine. Takes a couple tries to get it down, but everyone should practice with their CC gear.”
SnagMag is a simple, convenient and effective method of easily and comfortably having that spare magazine with you.
You can order your SnagMag from their web site, amazon.com, or the glockstore.com, and they are also carried by several brick and mortar stores around the country; MSRP is $34.95.
Choose your shooting hand―right shooting hand (SnagMag goes into your left front pocket) or left (goes into right front pocket), and firearm make and model. At my last count, the SnagMag web site had 89 different Make/Model /Caliber/Size options listed―everything from the venerable 1911 to the Walther PPS.
The SnagMag carries a Limited lifetime warranty and is made in the U.S.A.
Massad Ayoob is well known as a teacher, lecturer and writer of some of the finest books on using firearms for self-protection, and the legal ramifications thereof. In this 256 page book from Gun Digest Press. Straight Talk on Armed Defense, he is taking on a new role, the editor of other people’s work.
Each chapter is written by a different contributor, all subject matter experts and renowned in their field. Some you might already know, others, you will be glad you met though this book: Dr. William Aprill, Dr Alexis Artwohl, Detective “Spencer Blue,” Ron Borsch, Craig “Southnarc” Douglas, Jim Fleming, Tom Givens, Marty Hayes, John Hearne, Chief Harvey Hedden (ret), Dr. Anthony Semone and, of course, Mas himself.
These legal experts, police, psychologists, trainers and more coalesce around a single theme: preparing for and surviving (physically, emotionally and legally) using a gun to protect yourself.
There is theory here, especially surrounding the newest knowledge of memory and why it is so often wrong when we are absolutely certain we’ve remembered things correctly. Dr. Alexis Artwohl lucidly explains what “inattentional blindness” is, why we all have it, and why it is particularly important when we are under life-critical stress. “Perfect perception and memory are not consistent with the biological limitations of the brain” she says, and continues to explain what kind of training is best and how things like timing after-event interviews can help you.
As stated, there is theory here, but not just theory. “Spencer Blue,” a veteran and police detective, provides details of 9 cases, several involving women, with the truest of experiences―not always good―and lessons you can learn from them.
A whole chapter is devoted to finding relevant training. A truly excellent part of that explains why one should be cautious of trainers who are recently ex-military: their mission and tactics often differ from those needed by private citizens. They have not been trained in self-defense law, they use primarily rifles not handguns, and concealed carry is not part of their experience. That being said, there are many excellent trainers with military backgrounds―this chapter will help you find them. Oftentimes trainers with police experience are usually closer to what private citizens need, but even there, there are caveats about what to avoid.
Even people who don’t like to read can get a lot from this book just by skimming the trenchant pull quotes on many pages. “The reason the total number of murders in this country is fairly low is not a lack of trying. It’s because of modern trauma care.” “She did not get the thumb safety off and pulled a dead trigger.” “Just as he did not have a plan to shoot, he did not have a plan to stop shooting.” “Do we have a right to alarm innocent people?” Dozens more like this make the most important points even more memorable.
Mas Ayoob has a chapter all to himself, on the armed lifestyle. It includes information on traveling armed and which websites to trust for information more timely than a printed book could ever be. It also includes his excellent 10 Commandments of Concealed Carry. MSRP is $21.95.
Disclaimer―I’ve studied with Mas, and consider him a friend.