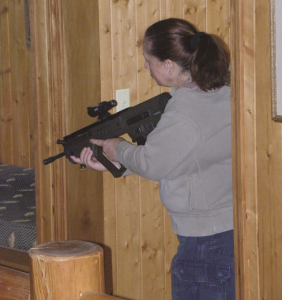 When it comes to defending oneself and one’s loved ones, it has been said that a pistol is for fighting your way to your rifle. It is difficult to argue that the superior ballistics and stability of a rifle platform would be a comforting thing to have on your side should you need it. One major drawback of using a rifle for civilian defense is that the close confines within our homes can make a long gun unwieldy, especially to those of us that are smaller in strength and stature. Hence, the pistol wins for most of us simply on the basis of portability and concealability. This being said, however, the nature of warfare is evolving into close quarters combat in urban environs much like anywhere we might live. This has stimulated designers of rifles to find ways to make their guns compact and maneuverable while still maintaining the advantages inherent in the rifle. One way to accomplish this is the bullpup design, which integrates the barrel and bolt assembly with the stock, compacting the action of the gun as far back toward the shooter as possible. The result is a much shorter gun that still has a full-length rifle barrel for all the advantages that offers.

One of the most innovative and well-designed bullpups on the market is the IWI Tavor (tuh-VORE). This gun was designed for the Israeli military to use in close quarters combat. Since first picking one up at SHOT Show Media Day a couple of years ago, I’ve been impressed with how well this gun handles and how easy it is to shoot.

The sample I tested is the SAR 18G, with the longest offered 18 inch barrel in the OD green color variation. Though the gun is offered with a 16.5 in barrel, the difference in overall length of the gun is so slight (26-1/8 in vs 27-5/8 in.) that the extra 2 inches of barrel offers more advantages than disadvantages. Even with the longer barrel, the whole unit is more compact than my AR-15 with a 16 in barrel and short entry stock.

The bullpup configuration takes a bit of getting used to. The magazine sits behind the pistol grip and trigger assembly. The magazine release on the Tavor is a lever just forward of the mag well that can be actuated by a quick bump backward with the firing hand or by squeezing it back with the support hand as you withdraw the magazine. The integral fore-end is shaped to lie along the supporting forearm and give maximum contact to the shooter for controllability. I found the fit of this feature to be more amenable to someone with longer arms (almost anyone I know) but it was easy for me to hold onto nonetheless. The safety lever is positioned and actuated much like that on the AR-15, so no learning curve there. A non-reciprocating charging handle is on the left side of the fore-end where it is easy to access with the support hand while maintaining a firing grip on the gun. The bolt catch/release takes a bit of acclimatization. It is located behind the magazine well and actuated by swinging the block-like lever down to lock open the action. Ridges on the sides of the lever aid the shooter in getting a grip on it. A quick upward bump on the lever sends the bolt forward. Of course, a bit of practice is required to find the most efficient way to operate these controls in concert.

The trigger is where most shooters accustomed to the AR-15 would find a place to complain. The Tavor’s trigger is a polymer lever with a heavy pull unlike the tuned, short feel most Americans are used to. The sample’s stock trigger gauged out at 13.5 lb. pull weight. In answer to this, both Geissele and Timney are offering aftermarket trigger modules for this gun that are considerably lighter and more appealing. The owner of my sample used a Timney replacement trigger that has a clean 6.5 lb. pull with a distinct re-set. The trigger module is easily replaced by popping out two pins to remove the factory unit and slipping the new one in and snapping it in place. The stock iron sights fold away compactly. The front sight post has a tritium insert for night visibility. The rear sight is a pop-up aperture. The full length top rail makes it easy to mount an optic. A two power ACOG proved an ideal choice for this gun. There is a short rail angled at 45 degrees for mounting auxiliary lighting.

Disassembly for cleaning and maintenance is simple and there are no tiny parts to lose. Three pins on the butt of the stock can be pushed out from the right side of the gun with the tip of a round of the gun’s ammunition to send the pins out far enough to grasp with the fingers and finish pulling them to the locked out position. The pins are captured and don’t come off the gun. The end of the butt swings down like a trapdoor, allowing the entire bolt assembly module to come out for cleaning and lubrication. The trigger group can then be removed by swinging aside the bolt catch and pulling it out.
The gun is very modular and the owner’s manual gives clear instructions for removing and reassembling all the parts, including the barrel group. A cleaning kit is included with all the brushes, a take-apart rod and patch tip and even an oil dispenser for putting just the right amount of lubricant into the proper lubrication points. Again, the manual can walk the shooter through the process easily. The closed bolt gas piston action runs quite cleanly, decreasing the frequency of maintenance compared to the AR-15 design. The gun is designed for use in battlefield conditions and a lot of thought was put into keeping the design simple and rugged.

The Tavor can be ordered from the factory in either right or left hand versions. If desired, the gun can be reversed from the factory handedness by purchasing a bolt and barrel kit of the opposite configuration. MSRP on this kit is $449.99. The charging handle, ejection port, and safety can all be set up on either side. Converting the gun requires taking it apart and isn’t accomplished easily while the gun is in use. As the ejection port is on the right hand side of the gun and set pretty far back on the butt, care would need to be taken not to get the face in a compromising position where ejecting brass could scald the shooter while shooting a right handed gun with the left hand. The reverse would be true for a left-handed rifle. This is something to think about should your training include using the gun with alternating right and left mounts. It can be done safely with a bit of consideration and acceptance of some blowback in the face.

Another conversion available for the Tavor can change the 5.56 chambering to 9mm parabellum, should the shooter wish to have the option of a pistol caliber carbine as well. The kit is purchased separately and comes with all the parts needed to change out your 5.56 Tavor to 9mm. The procedure is outlined in the owner’s manual and can be accomplished with simple tools. It comes with all the parts needed as well as a 32 round magazine for 9mm ammo. This conversion has an MSRP of $899.99. Additional 9mm magazines are available for $29.99 each. Of course, one should always check the legalities for where you live involving converting a gun and magazine capacity limits before taking on this project.

On the range, the Tavor handles smoothly and quickly from target to target. Its compact size pulls it in close to the shooter’s core for excellent maneuverability and a solid mount. Any sized shooter can handle the gun and get good trigger engagement as it comes from the factory. The shorter overall length is much less unwieldy for moving with the gun in a dynamic situation or searching around cover.

I tested the Tavor with 3 types of ammunition at both 50 and 100 yards for accuracy. It is chambered for 5.56 NATO, so I found one example of that caliber. The other ammunitions were .223. I shot from prone position using the 2X ACOG sight. The best 3 shots out of 5 shot groups are averaged to give the best representation of what the gun, rather than the shooter, is capable of. The results are shown  below.

Accuracy for this gun is comparable to the AR-15 platform and is more than needed for sporting or defensive applications. The Tavor would be an excellent choice for home defense or a bunch of fun in training and competition shooting. It’s solidly built and easy to care for which makes it practical. At an MSRP of $1999.00, it isn’t unreasonably priced for a high quality product. It may be a bit odd-looking, but it’s a look one can grow to love especially once you’ve enjoyed shooting it.