Keeping Tabs on the Handgun- Do Not Forget Anniversaries!

At one time I was in charge of the maintenance schedule for vehicles at a modest sized agency. I have also worked in corporate fleet maintenance. On a personal basis I realize that vehicle maintenance is important. Betsy, our family car, and Pamela, the Corvette, each are on a regular maintenance schedule. So is my Colt 1911, Old Loudmouth, and so are the spouse’s SIG 9mms, Thelma and Louise. My vehicles and guns will not last forever, but they are going to be maintained and not let me down during their useful lifetime.

Lubrication and spring replacement are important. With the Springfield Lightweight Loaded Model at 20,000 rounds and the Corvette at almost 200,000 miles and both performing as new, I think I have done something right. I have names for these machines rather than numbers because it helps remember important dates—and it is traditional among American motorists and gunners! The trick is to recognize important anniversaries and birthdays. If the maintenance schedule came on regular dates every year it would be easier. But a vacation or a trip adds a lot of miles and so does a heavy training schedule. You use the vehicle and the gun more when weather is hospitable, at least the fun use is greater. Let’s look at the procedure to keep the firearms running for a long time. I advocate quality firearms. Buy cheap, buy twice, and by maintaining the piece you will enjoy a long service life. The finish may wear and parts may be replaced but the handgun will not let you down. Quality remains after the price is forgotten. 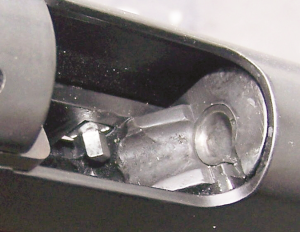 Handguns demand periodic maintenance if they are used and cleaning and lubrication even when they are not used. Certain anniversaries are important. 1,000, 3,000 and 5,000 rounds will mean a different procedure for each tune up. At 1,000 rounds the magazines should be checked for wear, at 3,000 the recoil spring should be replaced and at 5,000 rounds the firing pin or striker spring should be replaced. Sometimes a compact handgun firing a powerful cartridge needs the springs changed more often. It is akin to the problems with compact cars in police work—they were lighter on gas but we wore the suspension out sooner!

A lightweight, short slide handgun has more momentum when firing and simply takes more of a beating. A serious cleaning regimen and proper lubrication will make a big difference in the life of the handgun. Handguns are a device of irreducible complexity—one part breaks and the pistol stops working. Firearms that are fired often may suffer a buildup of powder residue. If not cleaned in short order this residue becomes caked up on the slide, in the action and even in the chamber and barrel. Compressed carbon will find its way into the firing pin channel and even under the extractor, causing a failure to extract. Corrosion attacks the handgun when worn and guns in storage are not immune to corrosion. Much of the corrosion that attacks a handgun is a result of body salts coming into contact with the handgun. A quality holster should always be used to carry the handgun. This holster should exhibit a balance of speed and retention and also offer protection of the handgun from perspiration and the body from a handgun’s sharp edges. 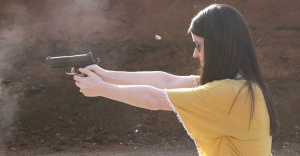 During the past decade I have experienced pieces of brass or carbon in the firing pin channel and under the firing pin block in quality handguns. In another case, a student at one of my classes suffered a failure to fire. The culprit was a piece of material—perhaps from a breath mint or something similar—that had found its way into the firing mechanism. The pistol had been carried without a holster in the pocket. Certainly proper procedure would have avoided most of these problems. You may inspect a handgun but in some cases you do not know what the problem is until you fire the handgun. Some problems may not exist yet and will be addressed by replacing springs in a timely manner. You do not have to invest heavily in springs. A single recoil spring will do most of us a year, a firing pin spring perhaps two years. A spring pack from Brownells will keep the pistol going for years. When you are checking the recoil spring against a new one it is time to replace the recoil spring when it has lost an inch of its free length. This is the rule of thumb with a service grade recoil spring and a five-inch recoil spring. With a sub-compact handgun a loss of a half inch of free length may indicate time for a change. The firing pin spring should be replaced every other time you replace the recoil spring. This is cheap insurance. 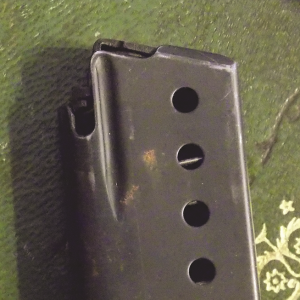 Magazines are a renewable resource and do not last forever. It is asking a lot for a magazine spring to last from full compression to almost no compression and feed every time. It isn’t a myth that downloading a magazine by one cartridge results in much less pressure on the magazine spring. Modern Glock, SIG, HK and Beretta magazines are well made and reliable. However, it is an engineering fact that reducing the load capacity by a single round reduces the load on the magazine by as much as five percent. Downloading a 17 round magazine to 15 rounds for the carry load may reduce the spring load by ten percent. Or simply load the magazine in the pistol and do not ‘top the load off ‘ after chambering a round. In the long run, that is a lot of pressure that is relieved. It is true that there are magazines that have been loaded a decade or so and come up firing, but it is also true that I have witnessed relatively new magazines give up during my firing classes. Most were poor quality aftermarket types. If you own a Beretta, Glock, HK or SIG then the name on the magazine should be same as the name on the gun. (An exception is Mec-Gar, supplier to most of the world’s European pistol makers.)

A minimum of magazines is three on hand. One in the gun, one on the belt, and one resting. If you have marked the magazines 1, 2, 3 and so on then there is no doubt which magazine has short cycled. You can usually feel the difference in strength by pressing in on the follower. Discard the magazine or if the body is good and the feed lips not deformed replace the magazine spring. When a magazine spring becomes weak it is common for the slide lock to lock at the wrong angle. Rather than the top of the follower cut out, the magazine will lock on the side angle of the follower. The handgun has a useful life far exceeding that of the magazine and magazines will be replaced from time to time. A tip—if you have brand new in the wrapper magazines put up for emergency do yourself a favor and proof them. Rarely even the best makers let a weak spring slip through. Proof fire them and put them back in the wrapper. If you do not believe revolvers are subject to malfunction we are going to a different church. The ejector rod loosens under recoil and may cause the revolver to tie up or refuse to open. This rod should be carefully tightened from time to time. The primary cause of a revolver malfunction is a failure to clean the handgun. Use a good bore brush and keep the forcing cone, barrel, chambers and recoil shield clean. The action should be lubricated sparingly. 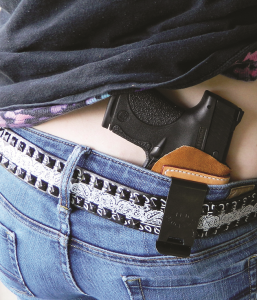 It isn’t uncommon for holsters to be left on the belt and washed with the clothes. Holsters are sometimes subjected to rain, mud and snow. Cleaning them after a spill isn’t difficult. The holster is already contaminated so running them under hot water doesn’t hurt a thing. Run the leather or Kydex holster under water and thoroughly clean the body and interior. If any grit remains it will scar the handgun. Water helps rid the holster of the contamination. Damage caused by mildew and mold should be headed off. While the holster is still damp use a soft toothbrush to get into the small areas of the holster and thoroughly clean the holster. Every seam snap and strap should be cleaned. Know which holster may be discarded—a floppy soft type of suede leather will not survive much damage. A properly waxed and finished holster will last through a lot of weather. Next, and this applied only to leather holsters, use saddle soap and work the soap into the holster. Then dry with a towel. After the holster has dried use Neet’s Foot oil sparingly. Too much of this oil and the leather will become too soft and threads will separate. Buff the holster if desired. When the holster no longer has its form or the safety snap isn’t operating, discard the holster. 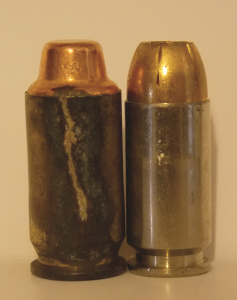 Ammunition anniversaries are important, too. It is a rule ofthumb to replace ammunition every six months. Carry loads are more expensive than practice loads and once you find a reliable loading then you will wish to stick with it rather than chasing a slight ballistic advantage. If you use a self-loader you may often remove the magazine, rack the slide to clear the chamber, then later reload the magazine and load the cartridge again. Depending upon the cartridge that is a lot of travel along the feed ramp. Sometimes the projectile will be pressed into the cartridge case. This is bad for two reasons, first, the case mouth seal is broken and the cartridge more easily contaminated. Second, pressing the cartridge back into the cartridge case will cause pressure to rise resulting in a potentially dangerous situation. If the cartridge has been exposed to moisture then set it aside for range use. Check the ‘top round’ and replace it after it has been chambered two or three times.

The advice in this report isn’t difficult to absorb and the rules are not difficult to follow. Follow the regimen and give your trusted friends a good scrubbing on their anniversary—or when they need it.