I usually have a file of ideas for columns, many of which are not-starters and some of which get overtaken by current events. Others seem like a good concept, but a couple paragraphs in I realize there isn’t a whole column in the notion.

It’s my theory that women love shoes because you don’t have to take off your clothes to try them on. Nowadays you can have them delivered to your door via internet ordering and the trying on is even easier. I recently saw a picture of country music star Miranda Lambert at an awards show and she was wearing a typical over-the-top awards show type dress. She was also wearing these: 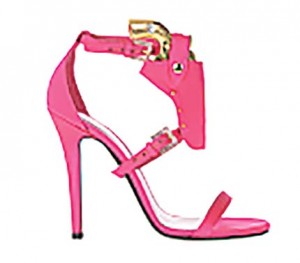 Gentle reader, I was nonplussed. Also, because I’m always curious about the intersection of pop culture and gun culture, I googled the shoes. They are from a Texas designer, Joyce Echols, made in Italy, and cost $849.The pink, sadly, are sold out, but they are currently available in black and red.

That’s a lot of money for a pair of shoes! You could buy a very nice handgun and ankle holster for the same amount, but, to each her own, I guess.

I was also amused that the shoes were called Come and Take It, since nowadays even shoes have titles. I can only assume Molan Labe was either already taken or too high-falutin’ even for an $849 pair of shoes.

If any reader owns these shoes, I hope she will send me a picture of them “in action,” preferably at the range.

Most of the rest of my column file was filled with politics—specifically presidential politics. Long-time readers will know that I love politics. That I could probably recite the batting order at the Watergate and Iran-Contra hearings. That I can look up from reading while CSPAN is on and tell you what district in what state a Congressman who is speaking is from.

But even I have politics fatigue this year. I have started fantasying about a world in which Anderson Cooper or Megyn Kelly looks earnestly at the camera one night and solemnly intones, “Nope. We’re out of pundits. Out of talking heads. Out of people supporting Candidate A, B and C (and on to Z). Please find something else to do for an hour. Go play with your dog.”

This seems to be the longest running presidential election in history. Don’t get me wrong—it’s been interesting, entertaining, infuriating—sometimes all of the above at once.

My fair town, even under a blanket of sputter-inducing early spring snow, is hosting Hilary Clinton today, Bernie Sanders Monday, Donald Trump next week, with John Kaisich stopping halfway between here and Rochester. Sen Cruz is promised, but not yet scheduled.

I feel like I could walk up to any of them and recite their major campaign themes, along with the names of their children and grandchildren, their shoe sizes and their preferred strength of chicken wings.

When we finally do get two candidates (or, possibly three) for the general election, what will they possibly have left to say?

And what about us, the over-informed electorate? A lot can happen in five months, and a lot probably will.

Gunowners will likely have a pretty clear idea about who is pro-gun and who is anti-gun, even as candidates tack left or right for the general, softening their primary rhetoric and ratcheting their positions to within a millimeter of what they think the majority will find acceptable.

Peggy Tartaro was the executive editor of Women & Guns magazine, while it was a publication of the Second Amendment Foundation. She serves as the managing editor of The Gun Mag.com. In addition to her duties as editor of the magazine, she has become a well-known spokesperson for the gun rights cause, appearing on numerous international, national and local television and radio programs to discuss the firearms civil rights issue. She has also dealt extensively with the print medium, through interviews with such titles as Glamour and the New York Times Magazine. She has consulted with authors of both fiction and non-fiction whose work is focused on women’s personal protection issues. An NRA Life Member, she served for several years as a member of the National Rifle Association’s Women’s Policies Committee. In 2007 she was the NRA’s Sybil Luddington Women’s Freedom Award winner. In 1997, she became a trustee of the Citizens Committee for the Right to Keep and Bear Arms (CCRKBA), and serves as that national gun rights group’s treasurer.