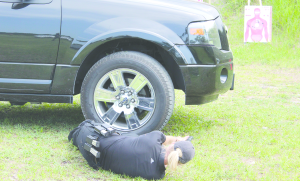 When you get to a certain age, your parts may not work as well as they did a few years ago. Fingers stiffen and arthritic joints hurt, and that makes shooting difficult. But you don’t have to give up shooting. With some changes in how you shoot, you can stay on the range as long as you want to be there.

Rob Pincus is owner of I.C.E. Training Company and Executive Director of the Personal Defense Network. He said neither age nor disability should be a barrier to people who want to shoot. “I’m teaching a 78-year-old man in one of my classes right now,” he said. “I teach older people all the time.” Pincus said his basic philosophy about older shooters is that they don’t need to change what they’re doing; they just need to make some accommodations. “You’re still a human being, and the mechanical devices still work the same way,” he said. “The question really is, ‘How do we accommodate the lack of physical strength?’” Pincus said the most important thing is technique; the techniques that work for people with weak hands or reduced body strength are simply the most efficient techniques for shooting anyway. The problem is that many people don’t know or use those efficient techniques.

“The techniques that we teach will work for a large number of people,” he said. “For example, I see women come to class who say, ‘I’m using this .38-caliber revolver because I can’t rack the slide on my husband’s 9mm.’ I hand them one of my 9mms and I teach them how to use it properly, and they can do it. The reason they couldn’t do it before was that they were learning a horrible technique, probably being taught by someone who was passing on something they saw or learned 20 years ago.”

The whole thing, Pincus said, is about mastering those efficient techniques that many people don’t know how to teach. “I’ve seen a lot of weak people run guns really, really well,” he said, “because they had the right techniques. Those techniques are kinesthetic alignment, full extension of the gun, lowering the center of gravity, bending at the knees and waist, fully engaging both arms, making sure that the elbows are as locked as possible, the shoulders are engaged forward, and the body weight is forward.” All of this is about using the body as efficiently as possible. 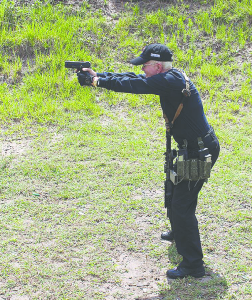 So how do we get to that point? By starting at the beginning with a good choice of firearm. “I recommend a medium- or large-frame 9mm semi-automatic,” Pincus said. “Too many people who are below the median in hand strength and upper body strength think they need to use a small gun. But when you give someone a small gun, there’s less surface area to contact the hands. This means that any felt recoil is going to be sharper, and there’s less to hold onto and exert friction on, whether that’s during shooting or during any other gun manipulation. So, perhaps counter intuitively, the weaker person needs the larger gun, but the larger gun needs to be a lighter, polymer framed gun, not a steel framed gun that’s large and heavy. Large serves a purpose; heavy doesn’t.”

Pincus said the ideal gun for someone with arthritis or weak hands is something simple: no decocker, no complicated safety. Just a basic modern striker fired gun. “One thing you don’t want is a heavy double-action-only revolver,” he said. “If you have weaker hands and you supposedly can’t manipulate the slide of a 9mm, why would anyone think you can control the double-action trigger on a small J-frame revolver?

Unfortunately, a lot of women are taken to the range with a small Jframe revolver and they’re allowed to cock it into single action and shoot it, and develop false confidence in how easy the gun is to shoot, out of the context of a defensive shooting situation.” Pincus said he doesn’t recommend a specific make or model firearm, although he does have some observations about firearms for people with both weak and small hands. “It really comes down to what fits the person best,” he said.

“If we’re talking about someone with not just weak hands, but also small hands, the gun that fits people for shooting the best on the smaller side is something in the Springfield XD and XDM family. Unfortunately, these guns require that the grip safety be depressed for the slide to move, and that can cause problems for someone who has weaker hands, because of the position that they need to get their hand in to rack the slide and lock it open. This is only an issue if there’s a malfunction, but it’s still an issue.”

The newer generation XDS models, Pincus said, have different engineering, so they can be manipulated without the grip safety being depressed. “Those are my new favorite guns to hand to someone who is weaker and has smaller hands,” he said. In a very extreme situation, where someone’s hands are so weak or painful that they really can’t handle most guns, Pincus recommends an old model Beretta 86. 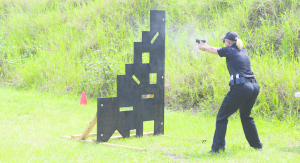 “It’s a full-sized gun in .380 that has a tip-up barrel,” he said. “It’s perfect for someone with a complete lack of strength because of a stroke or something like that. The tip-up barrel means that you never have to rack the slide to load the gun. Because it’s a .380, even if you do have to move the slide because of a malfunction, the .380 spring is very low pressure. And because it’s a full-sized gun, it’s very heavy in relation to other .380s, so there’s barely any perceived recoil and gives you a lot of surface area in the hand. It’s the ultimate fallback for someone who truly has a disability.”

All of that said, however, Pincus said most people don’t need to go to that extreme. “I’ve seen plenty of small, elderly women successfully run Glock 19s,” he said. “When you’re taught the proper techniques, you can use that kind of gun.”

When he has someone with arthritis or weaker hands for another reason in class, Pincus said, he has them run the same drills as everyone else. “In my experience, these students rise to the occasion,” he said. If the techniques being taught are sound and efficient, Pincus said, these students will be able to handle them. One of the things he teaches, Pincus said, is kinesthetic alignment. “This means putting the gun in a position to hit the target at 12 feet without using your sights, or pushing and pulling, or obsessing over trigger control,” he said. “You have full extension of the arms, you lock your elbows, and you have your shoulders forward of the hips. You have your shoulders engaged, which means having them forward of the torso, and your head between your arms, not above your arms. The gun is parallel with the line of sight.” When you do all that and have a relatively smooth trigger press, you should be able to operate the gun efficiently.

“This is also what I tell the fit 25-year-old to do,” Pincus said. “Why would I tell a fit 25-year old to rely on his musculature when 25 years from now he might not have that or he might be distracted in a self-defense situation? We give everyone the gross motor skill, more distracted solution.” Using kinesthetic alignment consistently, Pincus said, gives anyone an advantage, but particularly someone who is relying on weak muscles or poor coordination.

Another thing Pincus teaches is the “high compressed ready” position. “In this position you have the gun in front of the chest, with the elbows at the sides above where the gun comes out of the holster but below the line of sight,” he said. “That’s the lowest fatigue, most efficient position to keep the gun in. It’s something we would teach a 25-year-old fit guy, but for someone who has lower upper body strength, it’s much less fatiguing than any extended ready position. For someone who has reduced coordination, it’s much easier to drive the gun into the shooting position from that position because you’re extending the arms and locking them. It’s much easier than if you already had your arms extended in a low ready position and you had to swing your arms up to line of sight.”

Swinging the gun up takes more energy and more control to stop the gun at the right point, he said, than just driving the gun out along the line of sight. Another thing Pincus teaches that works for people with reduced hand strength is the overhand rack method. “When you need to rack the slide, you hold the gun up close to the chest,” he said. “You grasp it with the base of the palm and the four fingers with the thumb pointed back at you. It’s very important that the gun be close to you so that not only are you pulling back with one hand, I’m also pushing forward with the other hand on the frame of the gun. This enhances the reliability of the full cycle of the slide.”

This not only works for an 85-year-old, it’s also perfect for the 25-year-old who is just learning, Pincus said. “Those three things—kinesthetic alignment, the high compressed ready position, and the correct way to rack a slide—are the things we teach that are the most important for the reliable skill execution for someone who has weak hands or reduced upper body strength or a lack of dexterity,” he said.

Jolyn Esquerre is a 72-year-old shooting instructor who lives in Boca Raton, FL. As the co-owner of Identify-Point-Fire, she

teaches a number of shooting courses, as well as being part of Pincus’s network of instructors who teach Combat Focus Shooting. She has arthritis in both hands, and is a perfect example of a mature shooter who not only uses Pincus’s techniques, but teaches them to her students as well.

“There are three women in our group that have varying degrees of arthritis, Vicki, Linda and myself,” she said. “Vicki is 53 and has rheumatoid arthritis, and Linda is 71. She has arthritis in both hands and has had both hips replaced twice. She is not as mobile, but is a very good shooter.” Esquerre said she has tried a number of different guns, but always has returned to the Springfield XDM 9mm.

“This is the gun that Vicki and Linda use as well,” she said. “This is because of the shape and contour of the grip and the adjustable grip option. Most gun stores want to sell revolvers to women who have arthritis or who cannot rack a slide. However, most revolvers have a 10- to 12-pound pull when the trigger is pulled. This is a big problem for women who have arthritis or weak hands. I teach women or first time shooters how to rack a semi-automatic gun by pushing with the gun hand and pulling with the hand that is placed on the top of the slide of the gun. The gun is held in close to the body where we have the most strength. It may take some longer than others but this training builds their confidence in their ability to handle a semiautomatic. Once that is learned there is not an issue. However, I do urge all of my women in our group to be physically fit.”

The take-home message here is that continuing to shoot as you age—or learning to shoot if you have an upper body disability—is a matter of efficiency. The efficient techniques are less physically demanding and are easier to use than many techniques that have been taught for years. They’re also more versatile and will help you continue to enjoy your time on the range for years to come.