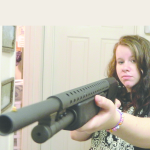 When it comes to smash, the more the better. I prefer a big bore handgun and for hunting thin-skinned game—the .30-06 Moss20-Gauge Cruiser a Serious Self-Defense Option rifle is my favorite. The 12-gauge shotgun has ridden in the trunk for many years. But then, the mild kicking .44 Special is a nice handgun and I am a staunch advocate of the far from extinct .30-40 Krag rifle. Each is a mild shooting cartridge and firearm combination with much merit. My ego is not so overblown I wish to keep hard-kicking firearms in order that my other half and the youngsters in the family cannot use them.
In shotguns the 20-gauge deserves our praise. The 20 is a better—as in more powerful— shell than the .410 and doesn’t kick as much as the 12-gauge, but it has respectable ballistics. The 20-gauge kicks considerably less than the 12-gauge an 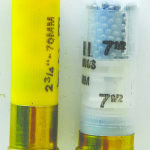 I have seen illustrations of the 20-gauge double-barrel used by big city police agencies. They make a lot of sense. I understand a number of Midwestern agencies issued 20-gauge pump shotguns. As for the double-barrel shotguns, they did not ride in the cruiser but were loaded just before the door is kicked in.d that means that interested individuals that need a defensive shotgun may deploy a reasonable substit

For those that seldom fire a shotgun, the recoil isn’t startling and the load is effective at a few feet. The problem with any shotgun for home defense is that it is long and doesn’t handle quickly in a home environment. Your long barrel duck gun tracks well but it doesn’t maneuver well. A short barrel—18.5” to keep it legal— and a lightweight shotgun is ideal. The Mossberg Cruiser is one such shotgun.ute and handle it well. The 20-gauge kicks well over half as much as the 12-gauge, don’t misunderstand, but it doesn’t kick almost as much—the various formulas are inexact as the weight of the shotgun varies as do the loads. But the bottom line is that both the gun and the shells are lighter and so is the recoil. 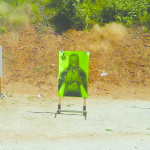 has many advantages. Quality manufacture of a good design is first. The Mossberg features an ambidextrous safety that is ideally located. The action is smooth and feed is positive. The dual action bars are smoother than a single bar design. The Cruiser version is a pistol grip shotgun. It is about 29” long and in 20-gauge weighs about 5 pounds. This is light and the shotgun handles like a marvel. I have always preferred the full-stock shotgun; however, for close quarters inside a dwelling and for use as a truck gun, the Cruiser makes a lot of sense. While I always aim my shotguns, the shotgun is handled by feel. This means it is maneuvered into position and fired based on handling. But the front bead is always in my line of sight. At night, when you cannot see, the handgun may be hopeless. The shotgun is not.

As for the 20-gauge shell, the energy of the shell must be considered. After looking over factory figures, it looks like my 20-gauge Cruiser is producing 1200-1300 pounds of energy. The 12-gauge produces 1500 pounds of energy. Now, I do not always count energy in comparing cartridges, preferring to consider actual damage. But this is a valid consideration when comparing payload and velocity. The .45 auto exhibits about 400-450 pounds of energy. The 20-gauge definitely has enough power to do serious damage. The wound potential is high. Number three buckshot has twenty .25 caliber buckshot pellets. While patterns differ in different shotg u n s , the Winc h e s t e r loads that comprised the majority of the test gave good tight groupings to 7 yards or so—and that is a long shot in the home. 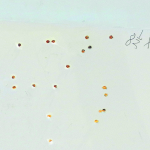 When all is said and done, both the Mossberg Cruiser and the 20-gauge get a recommendation for home defense. The combination is fast handling, powerful and reliable. With During firing tests the Mossberg 20-gauge proved formidable. This is a typical buckshot pattern. plenty of practice and dedication to the type, the pistol grip shotgun just may be a lifesaver. If you do choose this type of shotgun, the Mossberg’s good traits make sense.

Why the pistol grip shotgun? If you are traveling and wish to keep the most formidable but agile of firearms in the vehicle, there is nothing more compact and powerful. The key is learning to quickly deploy and use the shotgun. Since the shotgun is fired primarily by feel, you should invest in a good supply of light Winchester 7-½ or Number 8 birdshot and fire the shotgun until you are able to consistently make hits at 7 yards. Keep the shotgun low in front and blade your body toward the target. The position of the wrist is important. Do not bend the wrist at a severe angle, let the shotgun recoil straight back as possible.