The movie “American Sniper” certainly has made the general public much more aware of these highly trained sharpshooters and the role they play in the military and in law enforcement. What the public doesn’t realize yet, however, is that some of these snipers are women. According to the American Sniper Association (ASA), nobody really knows how many female snipers there are, because nobody has a good count of the number of snipers and SWAT teams in the US in general. The ASA says, however, that approximately 1 percent of law enforcement snipers are female. One of those female snipers is Courtney Quandt. At age 31, Quandt is part of the new generation of law enforcement that is coming from other walks of life and integrating into the LE community.

“I’m a fully commissioned police officer with the Port of Seattle, Washington, Police Department,” she said. “Our primary jurisdiction is the airport and seaport areas.” Beyond that primary duty, however, Quandt also is a member of the Valley SWAT Team. This is a regional SWAT team comprising officers from six different agencies in the area. Each agency contributes six officers to a SWAT team of 36 members; Quandt is the only woman on the team. Quandt said the team is deployed for a wide variety of actions.

“We’re called out for barricaded subjects, hostage situations, active shooter situations, high-risk warrant service and dignitary protection,” she said. “We actually do a lot of dignitary protection.”
Until about 4½ years ago when she joined the Port of Seattle Police Department, Quandt said, she had no plans to be a law enforcement officer. “Becoming a cop was kind of a surprise to me,” she said. “The only law enforcement experience I ever had growing up was watching ‘Cops’ with my dad on Saturday nights.” 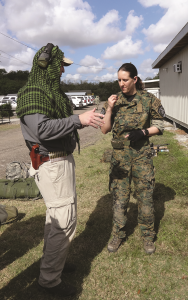 Quandt graduated from UCLA with a degree in Russian Studies. “I had a specialty degree in the Russian Flagship Program,” she said. “It’s a program sponsored by the Department of Homeland Security in order to get Americans to speak at a proficient level in languages of critical need. At that time Russian was one, so I did the program. It wasn’t just Russian language; all of my classes my last year were taught in Russian.” After she finished her bachelor’s degree, Quandt went to Middlebury College in Vermont to their summer language college, and from there to Russia.
“I lived there and worked there for a year, and when I got done I realized that I really didn’t like translating,” she said. “I love Russian culture and I love speaking the language, but sitting and translating written documents was not for me, and I needed a lot more training to become a verbal interpreter.”

Quandt didn’t want to go back to school for the time necessary to become an interpreter, so she starting thinking about what else she might do.
“I’ve had a lot of little careers,” she said. “I was working in coffee shops for several years, and I lived in Korea for about 6 months on a scholarship, where I learned Korean and taught English. And I was a rock climbing instructor for a while when I was at UCLA. I always liked jobs where I was out talking to people and doing interesting things and not behind a desk all day. The job that kept popping up when I was looking was police officer.”

Quandt knew she didn’t want to be a police officer in Los Angeles where she was living because of the traffic. She also knew that her parents had vacationed in Seattle and said it was very beautiful, so she thought, “Why not?” So she packed up her life and moved to Seattle, where she worked as a waitress for about 8 months before she was hired by the Port of Seattle. “That was a good thing, because I was a terrible waitress,” Quandt said. “There are people who have a knack for it, but not me.” Quandt spent the first six months of her new career as a police officer in the local police training academy. After she graduated and as she continued to train, Quandt realized that even though she had passed all her tests and her probationary period, she lacked technical knowledge and proficiency in firearms. 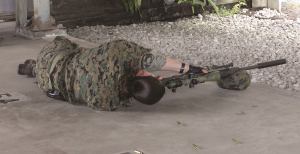 “I knew the only way I was ever going to get better at handling a handgun and a rifle was to get more training,” she said. “The SWAT Team here allows officers who are interested to come out and shoot with them on their training days, so those officers can get more practice handling their rifles and their handguns, and learning from really experienced guys.” Quandt went to some of the training days and got better with both her rifle and her handgun. Some of the team members mentored her, and helped her with tactics based on their own experiences. “Eventually there were four openings on our team, and I thought ‘Why not?’” she said. “And I just went for it. I passed the PT test and I passed the firearms qualification. They brought me on, and I passed the probationary period.”

After her probationary period, Quandt was placed on the entry team of the Valley SWAT Team. Still she wanted more.
“There are a lot of aspects to entry,” she said. “While I enjoyed it, I still felt the need to specialize in something, and snipers was something that really appealed to me. It’s very technical and it’s very different. I thought it would be a great challenge, and so far it has been. It’s been an amazing opportunity; I have excellent instructors, and I’m pretty darn lucky.” Quandt said she is definitely the new kid on the block.

“I’ve only been a sniper for 6 months,” she said. “I haven’t even gone to Sniper Basic yet.”

In April, Quandt had the opportunity to attend SniperWeek, a four-day training event for police and military snipers that’s put on by SniperCraft and held in St. Petersburg, Florida. She got to attend two days of classroom lectures and presentations, and then participate in two days of range training and competition. The event brought together snipers from throughout the Americas, with 2-person teams from as far away as Brazil. 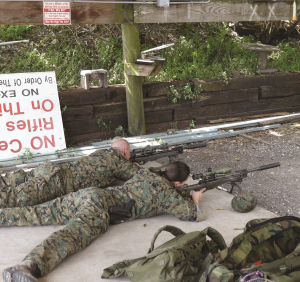 “I really enjoyed SniperWeek,” Quandt said. “It was a great opportunity and our team did really well. It showed that I’m getting some great training, and getting better at what I’m doing.” Since she is still working on her basic training as a sniper, Quandt is not deployable as a sniper yet. She still is filling other roles that are necessary to the smooth functioning of the SWAT Team. “Right now, I’m deployable as a spotter,” she said. “So I’m with our snipers that are currently active and deployable. I pair with them and am a spotter for them right now.”

One thing that surprised her when she joined the Valley SWAT Team, Quandt said, was how well she was accepted. “I didn’t have even a little bit of trouble being accepted,” she said. “Nobody broke stride at all. I was just one of the new guys, and I had to do all the stuff that the new guys did.” In her time on the Valley SWAT Team, Quandt said, she has never met another woman sniper.
“I’ve wanted to meet another one,” she said. “But in all the SWAT training I’ve gone to, I’ve always been the only female.” Quandt admits that some of her family would rather she had chosen another line of work. “I got married last September,” she said. “My husband is a paramedic, so we’re not exactly in the same field, but we can still talk about things and understand what the other one is talking about. And my brother and my dad think what I do is awesome. But my mom wishes I would be a kindergarten teacher instead.”

Quandt said that all her training has sharpened her awareness of protecting herself and the people she loves. Although her position allows her to carry a concealed weapon when she is off duty, she said, she can’t carry in every situation. “I carry everywhere I can, because if there’s a situation that needs to be handled maybe I can save a life or two,” she said. “But I’ve realized that I can’t always be armed; it’s just not possible. So in order to bolster my own self-protection, I’ve been taking Krav Maga for a year and a half now. Krav Maga is an Israeli fighting technique that’s basically street fighting. It’s quick, it’s fast, it’s honest, it’s brutal. It’s there to end the fight when you maybe don’t have access to your firearm.”

When all is said and done, Quandt said, she loves what she does. “Shooting is fun,” she said. “I’m getting paid to do it, and that’s incredible. And when it comes down to it, I really like knowing that if there is a situation out there that requires my specialty, I can handle it, and I can save somebody.”