Just like fashions, popular firearms come and go. What everyone is shooting today may be hard to find next year. When it comes to gun cleaning products such as brushes, cleaning rods, and patches, they’re pretty much the same year in and year out. Gun cleaning products don’t change nearly as much as firearms do. Or do they? Larry Weeks is the media relations manager for Brownell’s. He said that although basic tools don’t change a lot from year to year, trends in firearms do drive trends in gun care products.

“Products such as brushes, patches, and rods are all pretty well established,” he said. “They’re pretty much standard. They don’t change much. A good one-piece cleaning rod such as Dewey is a standard in the industry. They’ve been around a long time and they continue to deliver. And it’s nice that the threads are all standardized on cleaning rods so even if you have a really old rod, today’s accessories are going to fit on it.” That said, changes in the firearms market do drive some changes in tools. “We do see some new, different tools popping up from time to time,” said Heather Bennett, marketing manager at Otis Technology. “There also are a lot of new chemicals out there for a variety of purposes.” Weeks agrees. “As more smart people see the potential in the gun industry, they start moving into it with new products,” he said. “For instance, Lucas Oil, which has been a huge company in the automotive industry, has moved into gun oil. You’ll be hearing a lot about Lucas products before long.”

Everybody has a gun oil, Weeks said. “Every month there is ‘New Oil X-Y-Z,” he said. “The oils are all good. The most important thing about using oils is that you simply do it. Accu-Bore is one of my favorites, and it’s been around a long time. But whatever you have, what’s most important is that you clean your gun with it.” Besides oils, Weeks said, he also has seen changes in so-called “green” cleaning products. “That includes soap-based products such as MPro-7,” he said. “It’s been around for years for centerfire rifles, and for years it was the only soap based cleaner for centerfires. Now other manufacturers have picked that up and are making more of them, because they’ve seen the success of MPro-7.” 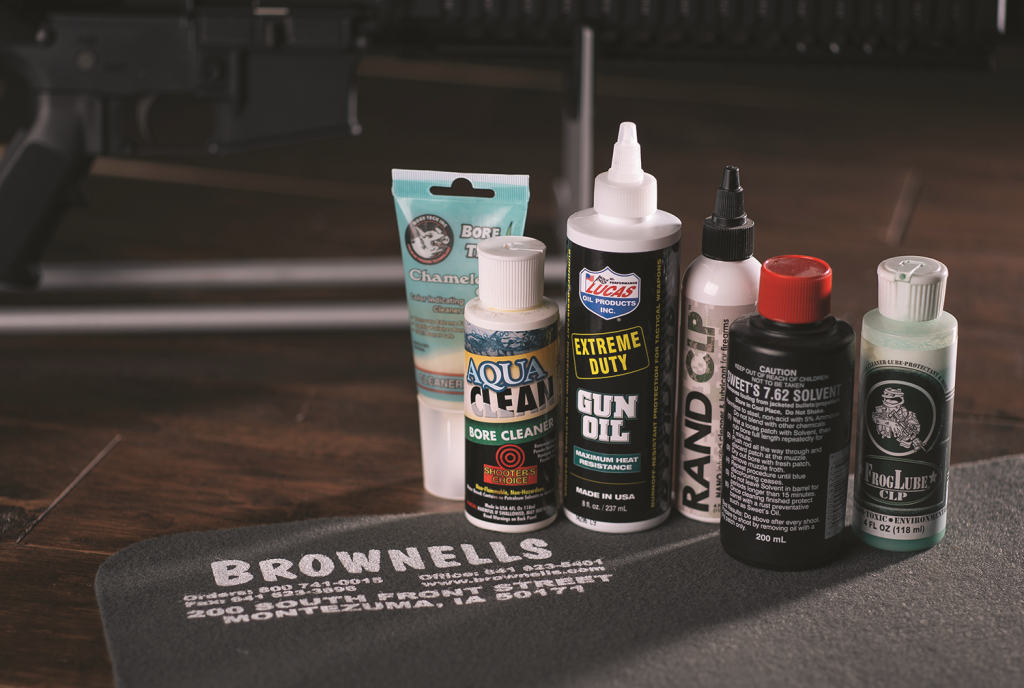 The same thing is happening in solvents, Weeks said. “New companies come up with new products that nibble away at the edges,” he said. “The standards are still there, such as Sweet’s Bore Cleaner and Montana X-Treme, but people keep coming out with new ones that shooters like to try.” Weeks said products with catchy names seem to do well, at least in the short run. “If you come up with a product that works, give it a good name, and advertise it, people will try it,” he said. “Once they use it and it works, they’ll be out there talking about it.” Weeks said one thing that’s driving the changes in gun care products is the rise of the Modern Sporting Rifle. “That’s contributed a lot to the spray and degreaser market,” Weeks said. “Since ARs don’t have wood stocks that you have to worry about, you can get a fairly aggressive solvent and just soak the gun down to get rid of loose powder that gets in the upper receiver. The AR lends itself to quick and dirty cleaning.” Some trends in firearms result not in new gun care products, but just a realignment of existing products to better serve a particular group of shooters.

“For instance, we always have had cleaning products for the 5.56,” Bennett said. “Once the MSR became so popular, however, we made a specific cleaning kit for those guns that we call the MSR/ AR cleaning system. We did that so when someone is in a store or searching on line they can find everything they need for cleaning an AR in one place.” Otis also developed a cleaner specifically for the AR platform. Now and then, the popularity of a particular firearm will result in the development of a new tool.

“We developed the BONE Tool to clean the bolt carrier and firing pin of an AR rifle,” Bennett said. “That part of an AR gets really dirty, and those parts are hard to clean. So we came up with a tool that would make cleaning those parts of the rifle less of a chore and a lot more effective.” Back in the day, many shooters covered their guns with Cosmoline before long term storage. After Cosmoline, Weeks said, many shooters used RIG Universal Gun Grease. “It’s been a good long term storage grease,” he said. “But long term storage technology has improved a lot over the years.” Today, shooters use products such as vacuum seal storage bags to keep their guns rust free in the long term.

“During 2013 we almost doubled the sales of our Rifle Storage Bag,” Weeks said. “It’s a poly bag that you can seal. You can actually bury a gun in the ground in one. That’s a case of a political trend influencing what people buy.” Besides the AR craze and politics, other factors also influence what people buy in the way of gun care products. “The concealed carry market is something else that drives what people want,”

Weeks said. “Shooters tend to like small, compact cleaning kits to go along with concealed carry guns.” Weeks said CLP products— cleaning, lubricating, protecting products—came about because the military wanted a single product that would do all three things. Breakfree developed the CLP product of the same name, and a new category was born. Today, a number of CLP products are on the market, including Breakfree and FrogLube. “Another one is Slip 2000, which is a ‘green’ product that contains no petroleum distillates,” Weeks said. “There’s been a big move to that type of product.” Even with the move to green cleaners, Weeks said, many shooters still like more traditional products. “For the old timers who have been shooting a long time, if something doesn’t smell nasty and threaten to burn you and your house down, it’s not strong enough,” he said.

As politics change, and the popularity of particular firearms rise and fall, the products that shooters want for gun care and cleaning follow their own trends. Some of those connections aren’t obvious, but they all tell a part of the story of firearms ownership in the 21st Century. W&G