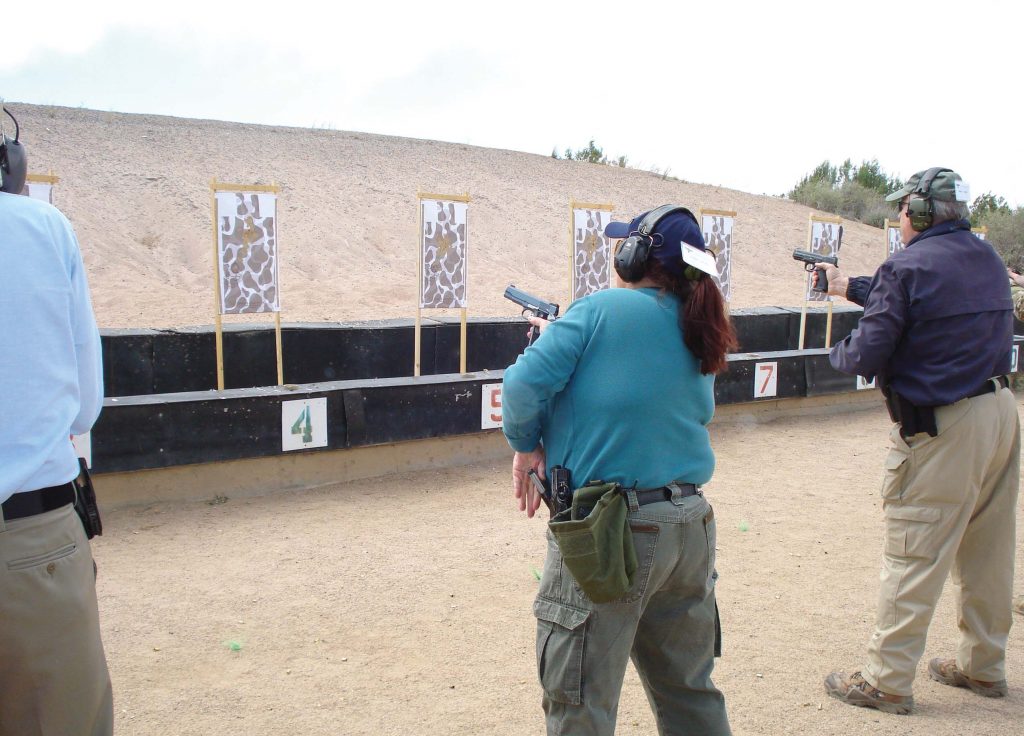 This is a year for bucket-list training for my husband and me. At last, in our 40th anniversary year, we would take in the Gunsite Academy experience of a 250 class, a return for a 350 with good friends joining us and staying for the anniversary Gunsite Alumni Shoot immediately thereafter. The final trip is scheduled for late September and early October and will be written up afterward for the readers of Women & Guns. Meanwhile, though, we needed new guns! As the school founded by Col. Jeff Cooper started out all about the 1911, we wanted firearms that would be modern, durable examples of the platform in the less-punishing-for-aging-hands 9mm caliber.

My choice involved a call to Nighthawk Custom to have them build a Ladyhawk for me. I had admired the gun at SHOT Show for a couple of years. The Richard Heinie design fits me like a glove and the understated titanium blue finish is beautiful. I ordered mine with an ambidextrous safety as the only extra touch needed for a gun that would have many rounds put through it in both training and teaching situations. As it was to become my primary working gun for at least a year, I also ordered extra Chip McCormick magazines for it on recommendation of the manufacturer.

The gun arrived in a padded Cordura case embroidered with the Nighthawk Custom name and logo in plenty of time for me to shake it out before it would need to be ready for the first high round count Gunsite Academy class.

Everything about the Ladyhawk is hand fit to very tight tolerances. The initial disassembly of my first Commander-sized 1911 with a barrel bushing took effort and was accomplished by my husband with the aid of more than the usual contingent of tools. The fit and finish of each part is excellent and after cleaning and lubrication, putting it back together was a bit easier.

The magazines, too, were tight and required some effort to load. They loosened up with use, though, and provide positive feeding when the rounds are positioned correctly, all the way to the “click” at the back of the follower that locks each cartridge in place. At first, loading with a full 10 rounds was almost impossible, though the broken-in magazines can be fully filled.

With its slim front and backstrap treatment, the thin grips and high undercut beneath the trigger guard, the Ladyhawk is the easiest 1911 I’ve handled for access to the controls. The administrative details of locking the slide manually, inserting and removing the magazines and actuating or sweeping off the manual safety are easy and intuitive. The beavertail grip safety is smooth and perfectly fit to offer the ideal resting place for the web of the thumb, well protected from the hammer yet at the ideal height to maximize a proper high grip for recoil control.

Since it was a chore to clean, I decided to see how long it would take for the gun to start telling me it was too dirty to run correctly. My husband took pity on it and cleaned it for me after each of the initial two turns on the range to be sure any tiny metal shavings from the wearing in process would be removed. The gun exhibited an odd quirk of locking back on a magazine that had one round left in it once in a while, especially after cleaning and lubrication. With some dirt accumulation, it became very reliable.

After that, I ran the gun through many practice sessions, passed it around to friends and students that wanted to try it, and demonstrated for classes I was teaching. Everyone found it very easy to shoot. The aluminum tri-cavity trigger breaks cleanly at 4 to 4-1/4 lb. of pressure and has a short, crisp, distinct reset. Trigger reach is 3.38 in., well within my personal maximum ideal reach of 3.75 in. allowing for a relaxed trigger finger placement and no need for replacement of the standard trigger with a short trigger to give me optimum fit. The frontstrap and backstrap of the gun have my favorite ball-milled scallop pattern for a very positive grip feel in the hand. The gun stays put in the grip, even with sweaty palms, and doesn’t chafe or irritate the skin of the fingers. The slim Alumagrip® grip panels are checkered just enough to aid your hold without being overly aggressive. All in all, the Ladyhawk is very controllable with any type of load one might care to fire, either with one or both hands on the gun. The Heinie Slant Pro Straight Eight Tritium night sights are easy to acquire in the light and really pop in low light. By the time we were ready for Gunsite 250, about 600 rounds had gone through the gun on one cleaning before it began to fail to feed rounds every so often.

The Ladyhawk traveled to Gunsite clean and pristine for its first major trial. We cleaned guns after each day of the 5-day class. It is Gunsite philosophy not to let the guns run to slide lock, requiring tactical reloads after every string of fire. The Ladyhawk liked this mode of operation and ran flawlessly. My fear of breaking the safety lever with the Gunsite grip that rides the safety at all times proved groundless. Our back-up guns never saw the light of day. You get what you pay for, it seems. We graduated together happily, eager to take on the rest of 2016 as the year of the Ladyhawk 1911.

Though a Commander-sized 1911 is about at the upper limit of size for my body to conceal, I found the Ladyhawk to be more comfortable to wear than any of my other guns of this size. Its slim grips and dehorned controls settled nicely into my Kramer straight drop IWB (inside the waistband) holster and hung around comfortably for hours on my belt while I went about the business of being me. Though the gun is all steel and weighs in at 34.9 oz., with good gear it is manageable as a carry gun.

By the time I got around to doing my accuracy testing, the Ladyhawk had around 2000 rounds through it. I tested a number of bullet weights, shapes and compositions through the gun. Table 1 shows the results for these at 25 yards, shooter seated and gun on a sandbag rest. Lighting was dappled sun and shadow.

The Ladyhawk never balked at feeding or ejecting any type of ammunition I tried. The new Ruger Inceptor ARX rounds, while accurate, seemed the least powerful and casings dribbled out into my lap as I shot. Plus power (+P) ammunition had no effect on controllability through this stout little gun.

All in all, I consider the Nighthawk Custom Ladyhawk to be an excellent investment. The price was definitely steep. While I probably should send it back to the Nighthawk shop to find out what the issue is with the occasional early lock back on the magazines, I am loathe to part with it long enough to do that. It’s such a great fit that I’ve bonded with it. We work well together and we still have adventures lined up and anticipated in 2016!