Ruger’s new LC9S compact handgun has given me pause for thought. The handgun is more capable than I would have thought, and frankly, perhaps Ruger should have re-designated the handgun altogether. It is that different from the original LC9. The outline, grip and magazine are the same but the new LC9 is a striker-fired handgun. This is a handgun that gets your attention. There isn’t anything wrong with the original LC9, but the operating mechanism is more difficult to master in a compact handgun. The LC9 is a double-action-only handgun. The trigger is pressed and the trigger action both cocks and drops the hammer. This long press is heavier than a singleaction design. While the system is reliable, the long trigger pull against a light handgun doesn’t make for the best accuracy potential in most hands. 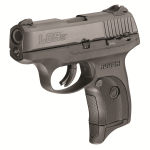 My experience with the doubleaction revolver in the .38 snubnose version has given me much experience in controlling short and light handguns. I have to admit that, just the same, such trigger work is often a chore and Redesigned Ruger LC9 Is Self-Defense Gem The Ruger LC9 and Black Hills Ammunition make a good match. January-February 2015 27 concentrating on the sights and grip while pressing a long trigger can be difficult. The trigger is operated by finger pressure and the muscles do all of the work. With striker-fired handguns the recoiling slide partially cocks the striker, what some call prepping the striker. This system results in a more controllable, lighter trigger action.

In order to manufacture a striker-fired LCP, Ruger could not simply change a few parts. A complete redesign of the firing mechanism was needed. A hammer is contained in the receiver, while the striker is located in the slide. With the striker fired action the mechanism is in the slide. The slide received a complete redesign for the striker-fired version. A dust cover is added at the rear of the slide and a positive firing pin block that works with the striker was designed. The trigger action has been extensively modified. The result is a significantly different handgun. Yet the LC9S retains much of the appearance of the original LC9 handgun. The trigger is much shorter and more controllable in this version. The LC9 was already light and concealable. Now, the LC9S has a slide that is even less likely to snag on clothing. The LC9S is delivered in a cardboard box with a nice zipper pouch and a gun lock. One magazine is supplied with the handgun. 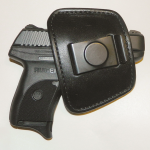 Manipulating and loading the pistol is the same as the LC9. For best reliability, the drill is: lock the slide to the rear. Insert a loaded magazine. Grasp the rear of the slide and let it run forward to load the pistol. Racking the slide over a loaded magazine sometimes doesn’t completely seat the cartridge. There is a manual safety that may be engaged. Practice manipulation of this safety—it can be a lifesaver. The pistol is slim and trim and offers a good option for personal defense. The proof is in the firing. To evaluate the LC9S I chose a number of practice and personal defense loads. I have fired this handgun extensively with a number of quality loads. At this point, with several hundred rounds fired, there have been no failures to feed, chamber, fire or eject. It would be wise to proof the pistol extensively with whichever load you choose for personal defense.

A short-barrel handgun in 9mm Luger doesn’t develop the velocity a five-inch barrel handgun will. It would be wise to choose a 115-grain JHP for personal defense use in this handgun. The heavier 124-grain loads and particularly the 135- to 147-grain loads probably will not exhibit significant expansion in this handgun. The Black Hills 115-grain FMJ loading is a good training resource that always gives good accuracy, and this was not a different case. The Ruger stayed on the target and fired to the point of aim at 10 yards with this loading. Switching to the Black Hills Ammunition 115-grain EXP loading I also enjoyed good accuracy. While this handgun is designed for short range combat use, absolute accuracy is always interesting. The Ruger LC9S demonstrated a 3-inch group for 5 shots from a solid bench rest at the 15-yard line. Some groups were larger and some smaller, the pistol is obviously accurate enough for personal defense. The EXP loading is driven to the highest pressure possible without resorting to +P pressure, and that works for me. Black Hills Ammunition also offers a 115-grain +P, a 124-grain JHP and a 124-grain JHP +P, but I reserve these for use in large frame handguns.

After test firing the LC9S and putting it through the paces in both combat firing and bench rest firing for accuracy, I find a credible handgun with much to recommend. The pistol is reliable with modern JHP loads, it fits most hands well, the new trigger action is smooth, crisp and reliable. Overall the Ruger LC9S cannot be faulted. It is a good defensive handgun well worth its price. W&G