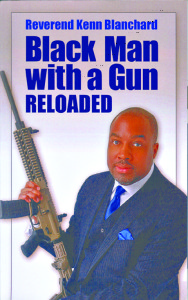 You may know Kenn Blanchard. He’s been a prominent voice in the pro-gun community for many years, a participant in many forums, and a speaker at national and state gun gatherings. He established the 10th Regiment Rifle & Pistol Clubs, and he Podcasts weekly with his “Black Man with a Gun” program. He is also a Marine Corps veteran, a former federal security officer and a federal firearms trainer.

Several years ago he wrote an earlier book titled Black Man with a Gun, which was rich in the gun-related history of people of color. It was revealing, and explained convincingly why many women of color have resisted private gun ownership: fear of the man.
But this is a different book: his personal Odyssey involving guns, his family, his politicking, and his acceptance by gun organizations, his legislative lobbying. Loaded with personal experiences and detail, the book covers a lot of ground over much of his adult life. Included is his own case study of how his pro-gun direction affected his married life, his children, his friends, and his government job.
It begins with his grandmother’s approach to guns, which was different from other black grandmothers. These matriarchs are an important element in the historical and political record involving American blacks and their struggle for inclusion in a broader, multi-racial society.

Blanchard’s story begins with his starting out in the gun community just as any other gunowner. He highlights the role of gun owning blacks in defending the Civil Rights activists of the 1950s, 60s and 70s from the Klu Klux Klan and hostile white police forces. He explains how he came face to face with officials of the National Rifle Association when he wasn’t sure they would welcome him at their board meeting, and how his federal employers treated him (not well) because of his pro-gun positions and public activities. What he said and wrote was monitored and his promotion ladder was shortened.
But, despite his problems, he persevered. He became an ordained minister. He found ways to reconcile his continuing pro-gun personal program with a changing society and political climate. He continues his effort to teach others about guns, not just in the minority communities, but in a wider general public.

His advise on parents teaching their children the fundamentals of firearms safety and respect for guns—whether or not they have guns in their own homes—is one of the most important chapters in this book because such education will save young lives, even in desperate crime-ridden cities like Chicago.

In addition to the fundamental concept that free men and women own guns while slaves do not, he also deals with the guns of recreation, and provides a brief description of many of the shooting sports, from simple back-lot plinking to one I had never heard about: the keneyathlon, a form of “freestyle riflry.”
Blanchard’s examination of the history of gun control laws in the US, begun as a tool for suppressing first slaves going back 400 years, then freedmen after the Civil War, and the modern Civil Rights movement, to current big city ghettos, should be essential reading for all Americans, especially many urban politicians and journalists.
Another key chapter of Black Man with a Gun Reloaded is in the form of a series of Epistles in which Pastor Blanchard advises African-American Women, his “Brothers,” his “Gay friends” to get educated about guns and arm themselves for personal defense.

This is a book you should read and then pass on to friends, relatives and co-workers, especially those who are against guns, afraid of guns, or unsure about individual gun rights.

Extensive Research Shines In Gun Control in the Third Reich. 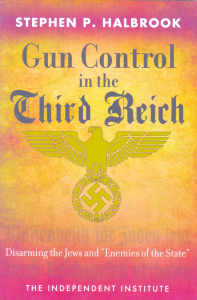 Gun Control in the Third Reich, Disarming the Jews and “Enemies of the State,” by Stephen P. Halbrook. ©2013. Published by The Independent Institute, 100 Swan Way, Dept. WG, Oakland, CA 94621; independent.org. Paperback, 246 page, $22.95.
While we have ample historical evidence that unchecked evil leads to genocide in the late 20th and early 21st centuries, many people see World War II and its lead-up as a sort of hazy movie starring the Greatest Generation; unfortunately, a generation that fewer and fewer people have had actual contact with.

Gun control advocates roll their eyes when gun rights advocates bring up the Holocaust. They snap back, “do you mean so-and-so is as bad as Hitler?” implying that the “gun nut” is completely off base.
Gun rights advocates would do well to arm themselves with Stephen Halbrook’s Gun Control and the Third Reich, an intensely researched, yet eminently readable book that details the blueprint of disbarment that led to the enslavement and genocide of six million Jews and countless other “enemies of the state.”

Halbrook’s book begins well before World War II, during the Weimer Republic years in 1920s Germany, when gun registration was first adopted in the country in response to political and social unrest.

By the time the Nazi Party gained power in 1933, the records—sold to the public as a benign measure—were used to first identify gunowners, particularly Jews and then to begin confiscation. At the same time, Jews were denied full citizenship.

The records were used to seize any guns that were not voluntarily turned in, and by November, the Jewish population of Germany was unarmed, when the infamous Kristallnacht took place, in which Jewish homes and businesses were ransacked and burned, synagogues torched and Jews were rounded up and arrested. The penalty for a Jew in possession of a firearm was 20 years in a concentration camp.

Halbrook uncovers new documents from German archives detailing the political blueprint, but also diaries and newspaper accounts which lend a human face to the history.
Those who don’t learn from history are doomed to repeat it is an oft-repeated aphorism that too many people shrug at, failing to heed its important message.

Sadly, it has become fashionable to ignore history as just something that happened a long time ago, somewhere else—or worse, bowdlerize it to fit current circumstances.

Halbrook’s book should be reading for every student of history, but more importantly, for every citizen of a free country.