Many companies get their start when someone says, “I can do that!” That’s just how Shady Lady Shooting got started. Owner Dottie Nobles saw a need and knew she could meet it, and in that moment Shady Lady was born.

Nobles grew up on a cattle and sheep ranch near Kaycee, WY, where shooting and hunting were just a part of life. She had to use a lot of “men’s things” because she couldn’t find clothing and other products to fit her.

“I’m pretty tall, and a lot of girls’ things just didn’t work for me,” she said. As she matured, Nobles continued to hunt, and married a man who is as passionate about hunting as she is.

“My husband can run down an elk, and that’s pretty darned rare,” she said. “We hunt deer, antelope and elk. And I’ve gotten a buffalo. That was pretty cool. In my entire family, I’m the only one who’s ever done that.” 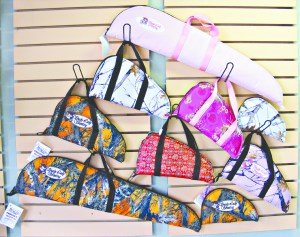 About five years ago, Nobles’ daughter won a rifle at a women-only sportsmen’s banquet. “My daughter said, ‘Mom, they don’t make any pretty girls’ gun cases or other girl stuff’,” Nobles said. “I looked at my guns, and I didn’t have any nice cases either, and I’d been looking. I hadn’t thought of creating anything like that until my daughter mentioned it. I’ve sewed all my life, and I said, ‘I can do that!’”

As demand for her products started to grow, orders outstripped her ability to sew them herself. Although Nobles has continued to do all the design work on her products, she soon turned to outsourcing to get the majority of them done.

“Most of them now are made in Maryland or in Spokane, WA,” she said. The choice of locations was partly an accident, Nobles said.

“I found the guy in Spokane by sending out letters saying I wanted to make these things,” she said. “I mentioned gaiters, and this guy wrote back and said, ‘What size and how many?’ I was really impressed because he was the only person who knew what they were.” That manufacturer is a small company who’s a good match for Shady Lady Shooting. 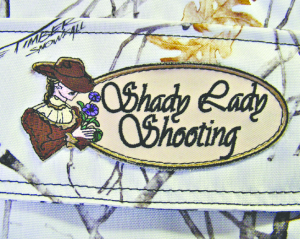 Then another opportunity crossed Nobles’ path. Because of an association with the Wyoming Business Council, she had the opportunity to attend last year’s Shooting Hunting Outdoor Trade Show—the SHOT Show—in Las Vegas last January. While she was in the booth, the CEO of the company C. R. Daniels stopped by. C. R. Daniels is a major manufacturer of industrial fabric products from artist’s canvas to big fabric laundry carts on wheels.

“He looked at what we’re doing and said, ‘I can do that,’” Nobles said. “So we gave them a try. He was right, and they’re great!” With two good manufacturers producing Shady Lady Shooting products, Nobles is starting to move beyond the few basic gun cases she started out with.

“By the 2014 SHOT Show, I’m hoping to have our line of concealed carry purses out,” she said. “We have gaiters being made now, and we’re planning to make bow cases in the future; we’ve had lots of requests for those.” 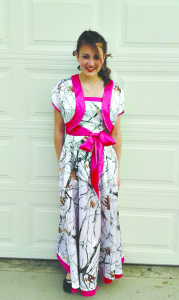 Nobles also is working on some new fabric designs. “We have a zombie line coming out,” she said. “And next year we’ll have our own camouflage line also. I’m designing that now. It will be kind of girly, but we’re going to have a man’s dress camo also. I think we’re going to call it ‘Tux Camo.’” Nobles is considering starting to produce some clothing, although she said at this point any discussion of that is just speculation.

“If we do that we’ll have to start little, because we are little,” she said. “But I have high hopes for this company in the future.”

Although Nobles owns Shady Lady Shooting, her family helps her with it. “My husband is a wonderful help, and I have three grown kids and their spouses,” she said. “So we have the Shady Lady Girls, and now we have the Grand Girls. And the son-in-laws and the son. They’re all terrific. One of them does the website and my son and daughter-in-law just graduated with business degrees, so I’m going to put them to work. We’ll have Shady Lady North, Shady Lady South, and me in the middle.” 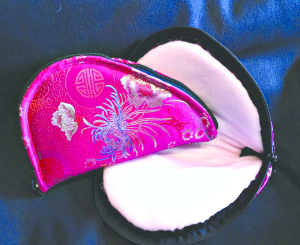 Right now, Shady Lady Shooting sells products from its website, and customers can find product in a few independent retail stores in Wyoming. Nobles’ high hopes for Shady Lady Shooting include running the company full time as it expands into a national market.

“I’d like to retire from my night job,” she said. “I’m a lab analyst at a soda ash mine in southwest Wyoming. And then we’d like to get Shady up and running. We might even like to have our own stores. My ultimate dream is to have a chain of Shady Lady stores that deal with just girls.” In this dream, Nobles sees Shady Lady as providing for the needs of all outdoors women, not just hunters and shooters.

“It would be just girl stuff that would be really girl stuff, not just guy stuff remade for women,” Nobles said.

Nobles hopes that early 2014 will be the beginning of Shady Lady Shooting products being available across the country. She is planning to attend the annual SHOT Show in January with products ready to roll. 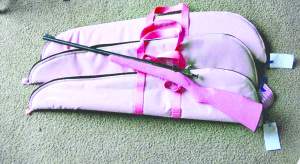