The relationship you have with your defensive shooting instructor makes all the difference in what you’re able to learn. Under the right instructor, you should come away with an understanding of your firearm and the ability to use it. Take a class under an instructor with whom you have poor rapport, and you’ll be frustrated and will have wasted time and hard-earned money.

Experienced shooting instructors say there are several easily identified criteria you can use to select an instructor who will help you learn the most you can. 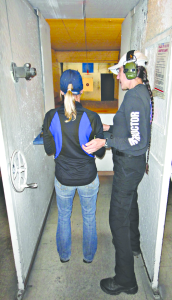 1. Look for an instructor who is patient and thorough.
“I start from the ground up and I take my time,” said Gerard Tramontano, an NRA instructor at The Gun Place in Pompano Beach, FL. “We do everything from deciding on a gun to buying the gun to taking it apart to clean it. We look at how it works, and we choose the right ammo for the gun. No matter how many times it takes, I go over one thing until the student understands how the firearm works. When someone walks out of here, she is an expert on that particular firearm.”

2. Look for an instructor who understands the differences between how men and women learn.

“Women need to understand why they’re doing something, instead of just being told to do something a certain way,” said Michelle Ressell, an NRA instructor from Glenwood, IL. “Women learn a skill by first understanding it completely and then by being able to practice it.”

In order to go through that process, she said, women need a little more time than men do to digest all the information and then apply it.

“When a woman has the time to do that, she’s very good at applying what she’s learned,” Ressell said. “As a result, a woman’s learning curve is very quick.” 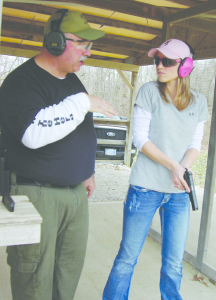 3. Look for an instructor who understands the different physiological makeup of women.
“Many women have trouble cycling the action of a semi-auto handgun,” Ressell said. “I show women ways to manage some of those more difficult weapon manipulation skills. For example, if you bring the firearm in close to your body, it’s easier to manipulate. But when you do bring a firearm close to your body, you tend to drift away from pointing the firearm downrange in a safe direction to pointing it sideways. So when I’m working with a woman on that skill, I have her turn her body so she can keep the firearm pointed in a safe direction.”

4. Having a female instructor isn’t necessary, but it’s nice.

“There are good male instructors out there, and when you talk to them, you’ll know,” she said. “However, women tend to do better with women because of silly little things. For instance, if you’re going to carry your handgun inside your waistband, when you go to the restroom, be very careful because you’re not used to that weight. The first time I went to the restroom with my handgun in my waistband, it went ‘plunk’ on the floor and like to have scared me to death. Men don’t think about those things.” Women know a lot of little things like that, that men don’t know, Hall said.

“We have ‘special circumstances’ sometimes that women need to tell other women,” she said.

5. Ask around and see what other people think about the instructor you’re considering.

“Check with the local gun store and get a recommendation from the store as to who gets rave reviews on their instruction,” Ressell said. “Ask how they get along with their students, and how successful the students are at the end of the class.” 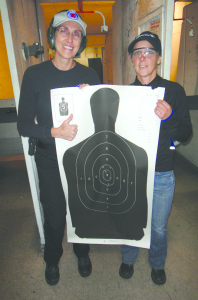 6. Ask the instructor why he or she wants to be or is an instructor.
“I wanted to be an instructor because someone came to my back door and tried to force their way in,” Hall said. “I had my gun behind my back, and I got it out and told them they couldn’t come in. Later the same people broke in to two other women’s houses and hurt them.” After that experience, Hall wanted to empower other women to protect themselves as she did.

When an instructor is teaching for a reason like that, you know you are learning from someone who is teaching for the right reason. If someone says, “It’s just a job,” or “It pays well,” back off and take another look at things. 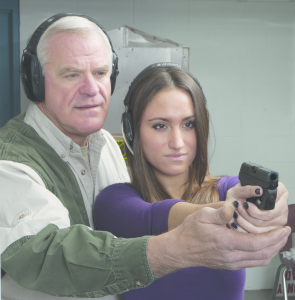 7. Look for someone who runs small classes.
“If I have five people in a class, it’s a big class,” Hall said. “I want each person to have individual attention, and I want to make sure each person knows how to hold the gun, how to stand, and how to do everything they need to do with it. If you have a big crowd with ten or more people, it’s just a crowd. You don’t have time to do everything they need for you to do. I’ll even do a class for one or two women, because when they leave I want to be sure they know how to handle that handgun.”