Until a few years ago, few individual shooters used sonic cleaning equipment. You might see one at a gunsmith or in the back of a gun shop, but it just wasn’t something that the average consumer was going to purchase. Over the past couple of years, however, that has all changed. The price of sonic cleaning equipment has come down, and many shooters are discovering that a sonic cleaner can be a cost-effective addition to their cleaning tools.

The first shooters to discover the usefulness of sonic cleaners were reloaders. “Most reloaders tumble their brass in a tumbler, which takes forever,” said Liz Friedmann, manager of marketing for Lyman. “It comes out looking beautiful, but the primer pocket usually has some of the media in it and you have to clean it out. But you can throw a load of brass into an ultrasonic cleaner and it will be clean in 10 to 15 minutes, depending on how grungy it is, and the primer pocket comes out clean. And it cleans the inside better than tumblers can.”
Before long, reloaders discovered that they could put gun parts and even entire handguns into some of the cleaners. They passed the word, and soon shooters were using them for much more than just brass for reloading. 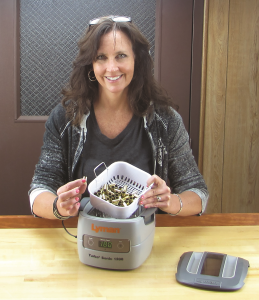 Lyman first came into the sonic cleaning market with a single sonic cleaner four years ago; since then the company has added four more models. They offer everything from a very small cleaner that will do just a bit of brass or a few small gun parts (or jewelry), to a very large one that will hold an entire rifle barrel. “More and more people such as police departments that have to clean lots of guns and gun ranges love them because they can clean dozens of guns in the length of time it used to take them to clean one,” Friedmann said. “And they do a better job, because they get the nooks and crannies that you can’t even get a cotton swab into to clean. It also makes things easier if you have a gun that’s a pain in the neck to take apart. You don’t have to strip things down into a million little pieces to clean it.”

Sonic cleaners do have some limitations. “We suggest that people don’t put wood grips into the cleaners,” Friedmann said. “But just about anything else can go in. The cleaning solution won’t hurt rubber or plastic or the polymers that a lot of grips are made of.” And—as with dishwashers and clothes washers—you can’t stuff sonic cleaners completely full so fluid doesn’t have room to circulate. Think of it like loading a dishwasher; if you put too many dishes in, they won’t get clean, and neither will your guns.

One of the first questions people ask when they start considering getting a sonic cleaner is “What do I use in it?” Several manufacturers, including Lyman, Police Products Corporation and Hornady, have developed cleaning solutions specifically for brass and for steel guns. Although we’ve seen a dramatic rise in the popularity of semi-auto firearms in the past few years, Friedmann doesn’t think that figures significantly in the increased sales of sonic gun cleaners. “I think it’s mostly the convenience of it,” she said. “People enjoy shooting—that’s the fun part—but anyone who shoots more than once in a blue moon knows that you have to keep the gun clean if you want accuracy and reliability. Cleaning isn’t fun, so if they can do it quickly and easily, they will. The time savings for cleaning brass also is wonderful for people who reload.”

Friedmann said you don’t have to purchase a huge piece of equipment to take advantage of sonic cleaning technology. “The smaller of our middle-sized models will hold one handgun and the larger of the two will hold up to three handguns at a time,” she said.  It also helps that the price of sonic cleaners has come down enough to make them realistic for the average shooter.
“Our TS2500, which will do 900 9mm cases or most handguns, sells for less than $150,” Friedmann said. “For most individual shooters, that model will cover most of their needs. We even sell a lot of these to mechanic shops; they use them to clean automobile parts.” The next size up, the TS6000, is large enough for multiple guns and runs less than $400.

Other manufacturers have sonic cleaners at similar price points. RCBS has a small unit for less than $200. Hornady’s sonic cleaners start at just over $100 and go up from there. Ryan Repp, PR manager at Brownell’s, said the sonic cleaners that are the most popular with Brownell’s customers are the larger, more professional models. “The one we sell the most of is the Turbo Sonic Power Professional Ultrasonic Cleaner from Lyman,” he said. “You can clean an entire upper receiver in it.” On Brownell’s website, the Power Pro sells for about $1200, making this a model for the serious shooter. Another model for the serious shooter is the Heated Ultrasonic Handgun System from Police Products Corporation, which runs around $650.

Just cleaning a gun in an ultrasonic cleaner isn’t enough, said Greg Infante, CEO of Police Products Corporation. “The clean and then lube process is very important,” Infante said. “Ultrasonic cleaning completely removes any protective coating from the entire firearm. There’s also some cleaning concentrate residue. So what you need to do is clean, rinse, and then protect the parts.”
Infante said once you’ve cleaned and rinsed the gun, it’s time for it to go back into the sonic cleaner with an appropriate lubricant. “We’ve developed a lubricant for use in our ultrasonic cleaner as a way to restore protection to the metal, and to displace any moisture that might be trapped in the parts,” he said. “It’s extremely important to do the ultrasonic lube. After that you hand lube, with whatever lubricant you choose to use.”

Friedmann agreed. “After you clean the gun, you dump out the cleaning solution and fill the ultrasonic cleaner with gun lube, and run the gun through a cycle of that,” she said. “It will lubricate the gun the same way, getting into every little nook and cranny that you couldn’t possibly get gun lube into if you tried.”
The whole process is very fast, Friedmann said. “The cleaning takes 10 to 15 minutes, and the gun lube takes another 10 to 15 minutes,” she said. “In half an hour, you have your gun completely cleaned and lubed and good to go.” 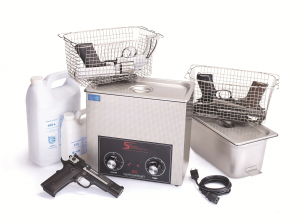 Ultrasonic cleaning isn’t a new idea, but only in the past few years has it started catching on in the gun industry. As more new people come into shooting for whom convenience is a factor, the popularity of sonic cleaners is likely to increase, and that means more and better pieces of sonic cleaning equipment available for shooters.