Whether sport hunting, target shooting, or using firearms in the line of duty or for self-defense, gun owners expect their weapons to discharge every time without fail.  However, this requires proper firearm cleaning and lubrication after virtually every use.  Failing to do so can not only decrease firing accuracy but also lead to unexpected lock backs and misfires at the most inopportune – even life threatening – moments.

Most gun owners and hunters understand the importance of regular maintenance.  Cleanings clear the bore of fouling and remove any residue or moisture build up on the firearm’s internal parts.  Gun oil is then usually applied to the firearm to lubricate its moving parts and protect it from corrosion. 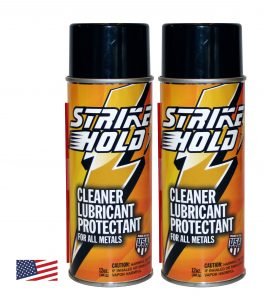 The problem is that solvents and oil-based lubricants can be slick, oily and do not dry completely.  With repeated use, these lubricants can build into a gummy substance that actually attracts dust, dirt, etc.

Compounding the problem are the harsh environments where firearms are used, which can vary from forest to duck pond to desert.  Exposure to rain, snow, saltwater, or even moisture in the air can also lead to corrosion.  This roughens surfaces and increases friction, which can impede moving parts, and decrease accuracy and reliability.  Other environmental contaminants like sand or dirt can similarly hinder function if they interrupt barrel rifling or even partially clog the barrel or internal parts.

U.S. troops were experiencing a weapon failure rate of almost 50% due to a sandy, desert environment.  As a result, several Major Generals requested a solution from Michael Huggard (formerly of the 504th of the 82nd), who engineered a product called StrikeHold that works as a lubricant, protectant and cleaner.  After using the product, the failure rate was reduced to nearly zero.

“As a RET Special Forces operator, and primary Armour for the 101st Air Assault Div under Gen David Petraeus, [with a] combined 26 years of experience, I can attest to the fact that StrikeHold is by far the most effective cleaner, lubricant on weapons…,” says David Foster, Jr. U.S. Army Ret., Advance, N.C.

Now the product, a fast-acting, penetrating cleaner and lubricant, is available to gun owners and hunters nationwide for necessary maintenance.  It goes on wet and dries in place, leaving a hard finish coating that protects weapons by deterring carbon build-up, contaminants and corrosion in all weather conditions.

As a cleaner, it removes firing residues, gum build-up as well as foreign debris from weapons components.  As a lubricant, it contains synthetic-based additives that act like microscopic ball-bearings to reduce friction.  The gun cleaner has been battle tested on all types of weapons systems from 9-millimeter pistols to M110 sniper rifles, M4 to 50 caliber, field artillery and even M1A2 Abrams tanks.

With the military and law enforcement pedigree of this unique gun cleaner and lubricant, it is fortunate that it is now available for wider use.

“The solvent qualities of StrikeHold are amazing. I am in the process of treating all of my firearms with your product,” says gun owner John Schultz. “Although these were cleaned and oiled [with another product] before being put away, I can’t believe how much material, lead and other residues that your product loosened up.”

The protective properties of the gun lubricant are also proving themselves in the most extreme environments, including arctic conditions, since StrikeHold will not freeze in use.

“One of my Ruger Mini 14 rifles has spent close to 30 hours afield with me, and recently when I disassembled it to clean it the StrikeHold was still doing a fine job,” says Alaskan gun owner Vic Kennard.  “Only needed to clean burnt powder and copper from the action and bore.  The big cold -50 to -65 below are still weeks away, but with what I can see the moisture has not defeated the StrikeHold.”

Most gun owners and hunters understand that not sufficiently cleaning their weapons is negligent and could potentially ruin them, but may have lacked the necessary supplies or patience to routinely do so after each use.  Fortunately, the availability of a battletested gun cleaner and lubricant is simplifying crucial firearm maintenance, while extending protection in the some of the roughest, most forbidding locations in the world.