The Joy of Gunwomanship: Lisa Gonthier of New Hampshire

We must be careful who we allow to enter our lives and our homes. Every encounter is potentially life-altering. People often bring ‘baggage’ with which we will need to deal should we let them in. Within the physical baggage that Lisa Gonthier’s future husband brought with him was a shotgun and a pistol. He had the courtesy to ask if she would have any problems with the two firearms being brought into her house. Although she had no philosophical objections, she knew at once that she would need some instruction if she were to live around guns.

She also knew, as so many women are recognizing, that it would be better to learn fundamentals from a professional rather than her boyfriend. She immediately signed up for a class at the closest facility, Major Waldron’s Sportsmen’s Association in Barrington, NH.

Destroying all stereotypes of gunmen, Lisa’s first instructor was a soft-spoken music professor at the nearby 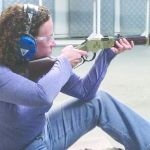 University of New Hampshire. The class was such an enjoyable experience that she signed up for another. And another.

Soon she was involved in tactical shooting sessions, which she found exhilarating. It was not long before the course conductor, the NRA Councilor in the area, suggested that she become a certified instructor. Teaching others would bring her to a new level of understanding and enhance her own marksmanship. Lisa was special, he said, because she was a talented shooter, and she was a woman. Qualified instructors are always needed, and there are very few female instructors. Lisa agreed to give it a try, if, at first, reluctantly.

She was also reluctant to subject herself to my interview. “I’m not the right kind of woman for an article,” she protested. “You are exactly the right kind of woman,” I countered. Her major objection was that she was not very interested in the politics of guns, and her understanding was that activism was the main component for someone who would “make a difference.” While she appreciates that work must be, and is being done, towards the preservation of our rights as gun owners, she does not think that she does very much in this direction. Again, in my never to be humble opinion, Lisa is wrong. She is doing a great deal.

Lisa does exactly what is needed! I know as an observer of technique when she has volunteered at my events, and as a participant in a Women’s Only NRA Basic Pistol class for which she was one of the team of instructors. Lisa personifies the joy of a woman shooter! She is cute, competent, and deadly accurate! She is an impressive speaker, able to simplify complex subjects without talking down to her audience.

Women are not necessarily familiar with some of the imagery that makes sense to men. For instance while women may comprehend the idea of how rifling a gun barrel is analogous to throwing a football, even today when Title IX has been in effect for decades, a large percentage of women have never put a spin on that cylindrical ball. They might have no trouble comprehending the similarity, but they don’t have the visceral understanding. Their arm and wrist do not have the memory of the screwing motion. Tightening a jar lid might get more of an “… oh, I get it…” reaction.

Lisa speaks to women on a lot of levels. It is obvious from the time she begins introducing herself that she is not someone on a mission! She is someone who simply enjoys what she does, is not defensive about what she does, and immediately makes what she does seem not only acceptable but doable. When you listen to Lisa, you feel competent to head right to the range, even if you have never held a firearm before; even if you have had a bad experience with them. You can see the apprehension leave a woman’s face, as she listens to this friendly person. Lisa is a recruiter to the cause of female gunownership and use. She not only introduces women to the shooting community, she enfolds them. Everyone who has been in contact simply wants to be like her! She normalizes the idea of a gunwoman. She is not a fanatic, she simply loves playing with these powerful tools, and she makes playing with them seem ordinary. She removes the mystique, she makes others feel that they could enjoy this, also. She expands the population of gun-friendly people. Gunfriendly people do not vote to take away Second Amendment rights. Gun-friendly people are not susceptible to the imposition of fear-driven restrictions on rights. What more could one ask for in a woman who makes a difference?

People enter our lives and have varying impacts upon us. The man who started Lisa on her current path was not a shooter as much as a collector. “He and his dad were into antique Winchester lever actions.” Once Lisa’s focus changed, he was totally supportive. “He encouraged my new hobby every step of the way, from initial learning to instructing to all the hours I volunteered at the club to competition to travelling around the country to train.” Relationships come and go. Lisa’s marriage did not last. Today, the man who brought the first guns into her home is gone. However, the enjoyment of firearms he shared remains, and Lisa continues to share it with others.

Genie Jennings is a Contributing Editor for Women & Guns Magazine writing a column, Making a Difference, showcasing the women who are doing so. After cutting her teeth in the Pro-Gun movement, she has expanded her activities into the more general political realm. She serves on town committees, and is an active member of the Republican Party, serving as an officer at both town and county levels. A proud member of SAF, GOA, NRA, and Sportsman’s Alliance of Maine, and former National Spokeswoman for SAS, she never refuses an opportunity to speak publicly on the subject of Second Amendment rights. Genie is a member of the South Berwick Rod & Gun Association, where she produces Introducing Women to the Shooting Sports (which has now brought 240 women into the pro-gun community) and chairs both the (N)ews (A)nd (G)overnment Committee, and the annual fundraiser, 30Gunsin30Days Raffle. She is a gardener, fisherman, ski instructor, and proud grandparent. With her husband, she began attending GRPC in 2001. She has been a speaker and serves on the Resolutions Committee.