It was this writer’s privilege to partake of the opportunity to train with John Farnam of Defense Training International, Inc. (DTI) when a beginning/intermediate defensive handgun class was offered in Yakima, WA, last September. Farnam, and his wife Vicki, are both renowned instructors who travel all over the country and abroad offering training to law enforcement, security and civilian alike. Anyone that wants to take responsibility for their personal, professional and family safety by learning to use firearms is welcome. Farnam has more than 40 years of professional experience to impart.

“The techniques we teach were paid for in blood to be those most effective in preparing you for the fight of your life, which could take place tonight,” Farnam said in introductory comments. “I want to take you from amateur to operator so you can fight and survive with any gun.”

As to the topic of whether to carry a gun, Farnam says, “Either do or do not, it’s your choice. Don’t go halfway and only carry one when you feel you might need it. That’s ridiculous! You never know when you’ll need it so you have to be ready at all times. If you’re not willing to do that, fine. Don’t carry one at all.”
Farnam definitely walks his talk. Throughout his many years in law enforcement and expert witness work, he has become a student of real shooting situations and the lessons they have to impart. This is what he means when he says the techniques he teaches were “paid for in blood”. 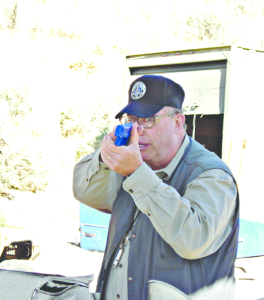 Just when eyes were widening at Farnam’s frank and sometimes grim remarks, he turned it over to his assisting instructors for comments. They reassured us that it wouldn’t be scary and they would help us all along the way to be safe and learn what they had to impart. And a nicer, more supportive group of instructors couldn’t be found. Each was well qualified to teach the DTI curriculum and their enthusiasm for teaching and devotion to the art of gunfighting was obvious. And, lest I paint John Farnam with too stern a brush, it was obvious, in spite of his no-nonsense approach to the serious subject of fighting with a gun, he was a caring person with a passion for teaching people how to protect the most precious gift we are given, our lives.

Our class consisted of all skill levels from first-time gun handlers to repeat students and instructors of the gun from other schools. Farnam split the class into beginning and intermediate/advanced groups and let the students decide where they felt most comfortable starting out. He left it up to us, once we got started, to ask to change groups if we felt out of place for any reason. Farnam trusted instructors Joseph Bobovsky, Mike Clark and Mike Cole to work with the more experienced group while he worked with instructor Ted Sittner to introduce the newer shooters to his fighting skills. My husband, Tom, friends Gila Hayes and Melissa DeYoung and I went with the advanced group. 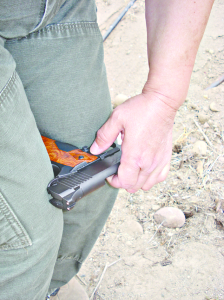 Farnam runs a hot range, which means that the students are responsible for keeping their guns loaded and ready to go at all times. We started with a slow concentration drill of placing 6 shots in as tight a group as possible in the small head box of our targets. This diagnostic of trigger control let them know how much work they would be in for. It was a test of our ability to follow directions as well. We were expected to step sideways and draw at the command of “Gun!” Next came the challenge to our targets. They gave us the “tape loops” of: “Police! Don’t move! Drop the weapon!”

Farnam had explained that, whether we were police or not didn’t matter. It was proven to get the attention of bad guys and witnesses alike and could be explained as calling for police as well as announcing you might be police. A challenge with presentation of a gun can often stop a confrontation before it becomes necessary to shoot, especially when delivered in a good commanding voice. 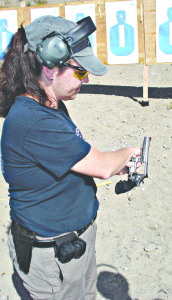 At the whistle, we stepped sideways again and engaged the targets. The side-stepping had been proven through bitter experience to be preferential to being a still target. Challenging and stepping would be expected with every drill throughout class.

Next, we were shown how to reload our guns with magazines retained instead of dropped. It didn’t matter to the instructors whether we stashed partial and empty magazines in our pockets before or after we got a full magazine to replace them. This was adult education and whatever felt most natural to us to get the job done was OK with them. It was brought up that keeping the partial magazine could be a lifesaver if the fight was long lasting and round intensive or if you don’t venture out with a stack of magazines on you as you go about your daily routine. Though more time consuming by a tiny increment, it was best to practice the harder way for the times it might make a serious difference.

The pacing was well matched to the skill level of the students and the guns we had brought. We moved to multiple shots, loading from empty, malfunction clearing and shooting at swinging steel targets, all while keeping to protocols. Before we knew it, we were running on a timer and had passed DTI’s basic test. 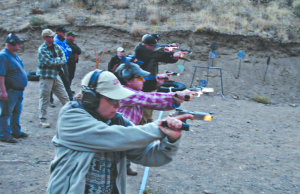 We stayed on the range throughout the day and into the night for some low light and flashlight work. Meals were taken together. Our hosts, Mike and Caroline Clark, treated us as honored guests to the wonderful private range they had built on their own property and had arranged for burgers grilled at lunch and pizza for dinner. We were all bonding into new friends. Mike Clark is a capable instructor and his wife, Caroline, was happy to have three more ladies to share her advanced class experience with as well as male friends old and new. Well after dark, we straggled back to our motel rooms to clean up and rest for the second day, to begin at 9am Sunday morning.

Sunday began with Farnam showing how to put together a trauma kit for treatment of gunshot wounds, should it become necessary. DTI teaches a class on treatment of gunshot trauma. Farnam feels that serious shooters should all have this type of training as part of the whole concept of fighting with guns and should always be ready with a trauma kit at all times. Instructors, especially, need to know how to take care of injuries as accidents happen when handling dangerous implements like guns and it would be irresponsible not to be ready. I couldn’t agree more! 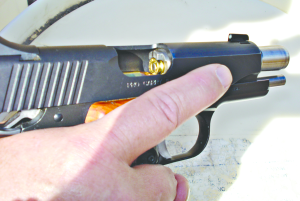 We began our shooting with the slow fire concentration drill again. Our instructors were pleased with the improvement we had all shown the day before and were happy to see that we hadn’t lost too much overnight.

Next up, the instructors got to exhibit their artistic abilities as they drew hostage pictures on our targets in front and just slightly to the right of the target head. The scenario would be coming around a corner during a situation in our homes to find an armed suspect with a loved one of ours as hostage. Rather than blast away frantically, we were to distract the bad guy with a new “tape loop”: “What do you want?”

This gives us a moment to assess while the bad guy either comes up with a request or continues to threaten harm. At the whistle, we were to shut the threat down with well-placed shots that would stop them without causing muscle spasms that would endanger the hostage. Accuracy would be crucial to our loved ones at this point. This understood, we all did very well. 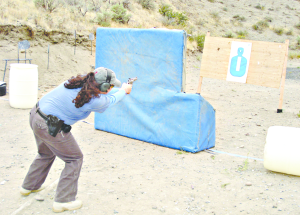 We moved on to very close range firing from retention position. This was performed dominant hand only while the support arm wrapped our heads to deflect any incoming blows to some degree and keep that arm out of harms way from our own firearms.

One-handed shooting with both dominant and non-dominant hands followed. The instructors demonstrated effective use of cover from kneeling, standing and prone, keeping back far enough from the cover to protect from ricochet and slowly working out to where they could see the target while most of their bodies remained obscured. Then, it was our turn to try shooting. We were encouraged to use the cover advantage to the best of our ability in the manner we might actually do so in real life. 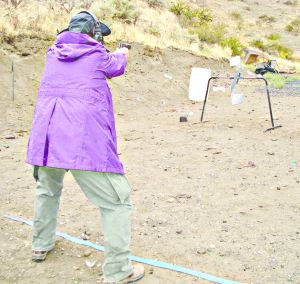 We worked on one-handed manipulations of our unloaded guns that would become important if we lost the use of a hand in a fight. We tried the tricky task of locking our slides back with both only-right and only-left hands. They gave us some tips on how this might be accomplished and let us work it out for ourselves with our guns under their watchful eyes.

This administrative task is the most difficult to accomplish with one hand and, if we could do it, any other manipulations would be easy by comparison.It was time for the testing to begin.

To earn an advanced DTI pin, we had to shoot one of the heavy steel double-headed swing-arm targets in such a way as to get it to flip completely over, while following all the procedures we’d been taught, moving after every four shots, reloading and fixing malfunctions as required, all within 20 seconds. We could try as many times as we needed to get it done. Needless to say it wasn’t as simple as it might sound. Accuracy and catching the timing of that swinging bar just so while not forgetting to follow the rules was a serious challenge! One by one, we got it while we fought frustration to stay calm. 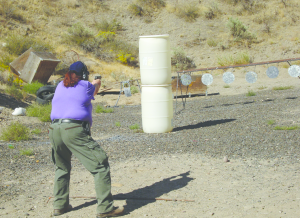 To make up for the hard work of testing, our final drill was “battlefield pick-up.” Students set out their guns and ammo sources and let their classmates try them, with their different action types, sights and controls on the steel swingers. It was a fun way to end the shooting day.

Farnam concluded with encouragement and praise. He urged us to work to keep fresh the skills we had learned. Each of his instructors was given the chance to give us some final words as well. It was on each of their faces that they were doing what they loved by sharing what they knew with us and that the best part to them was seeing the progress we had all made.

Tom, Gila, Melissa and I returned to the rainy side of the mountains feeling that we had made some wonderful new friends on the East side of the state. We had enjoyed shooting together and learning new skills to integrate into our self defense toolboxes.
Special thanks to Dr. Joseph Bobovsky, who coordinated the class and came to help instruct on crutches post surgery on his lower leg. Also to Mike and Caroline Clark for sharing your home range, time and knowledge.

Mike Cole and Ted Sittner, your love for the art of handgunning came across loud and proud. Your kindness and encouragement matched your enthusiasm. I enjoyed spending range time with you.
Most of all, thank you John Farnam for sharing your vast knowledge in practical, down-to-earth techniques. You are the real deal, no pretensions no compromises.