When a woman lives alone or is a single mom, most people see it as the norm to think of her as the primary home defender of herself and her children. When dad is in the picture, however, there seems to be a general assumption that he’s going to take on the role of defending the home as well as his wife and children. This isn’t always, or even usually, the case. Depending on the situation, the woman may be called upon to defend the home and family just as women did on the frontier when their men were away.

“Most of the time, it’s the women who take care of the kids in a family,” said Bob Esquerre, who with his wife Jolyn owns Identify Point Fire in Boca Raton, FL. “If a woman is an in-home mom, where the father is at work and isn’t there a lot of the time, that by default makes her the defender of the household. If her partner is working all day, she’s in charge of defending the homestead.” Even if mom is a part-time worker, when she gets home she’s in charge of protecting her children. In a few couples, even childless ones, it even goes beyond that. Female police officers and women who serve in the military sometimes take on the job of being the home defender because they are better trained for that than their husbands are. Although this is a fairly unusual situation—and these women already are trained—it is yet another situation in which the female partner is the primary home defender.
Some women start out with the idea that defending the home is not their responsibility, Esquerre said.

“They come in and say, ‘Let my husband do it; it’s his job,’” he said. “We respond by asking, ‘Who’s home with your children all day?’” When the mother realizes that she’s the one who’s home all day and that her husband will not be there to protect her should something happen her usual response is “Oh. I never thought about that.”

“If her husband is already training, she often will decide to go train with him,” he said. “That’s perfect, because once she has some experience with him, she’ll come to Jolyn and me and ask for more training. But she has to figure that out for herself.” 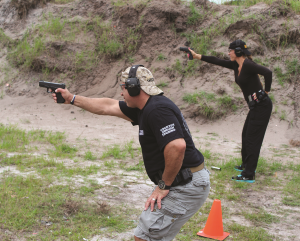 Although at first she may be resistant and reluctant, and say it’s not her role, once she realizes her husband isn’t going to be there to protect her and her children during the day, she’s in the position of potentially having to defend her home.
“It’s not just about how you’re going to defend yourself,” Esquerre said. “It’s also about how you’re going to defend your daughter or your son. That’s the driving force.” He said he estimates that about 35 percent of his female students come in this way. Esquerre said he has one male student who’s been a “gun guy” for years. When he married, the guns came with him. Then when their children came along, he was familiar but not proficient with firearms.

“Now that the kids are getting older and he’s traveling more, his wife has said, ‘Maybe I should learn how to use a gun,’” Esquerre said. When a female partner reaches that point, Esquerre said, they let her decide whether she would rather train with Bob or with Jolyn.

These young mothers often think “smaller is better” when it comes to guns, Esquerre said.

“When that happens, we give her a small gun to fire,” he said. “It’s small and lightweight, but still fires a 9mm round. She’ll say, ‘The recoil is too hard,’ and ‘A semi-auto is too hard to use.’”

At that point, Jolyn gets a standard sized 9mm. Jolyn has arthritis in both hands, but she handles a larger 9mm handgun just fine. “She shows the student her hands, and teaches her how to rack the gun,” Esquerre said. “All of a sudden the student says, ‘Oh! That’s how you do it!’ Then she understands that this isn’t a strength thing; it’s just learning a technique.” From that point on, it gets easier.

“First we have to find her the right gun that makes her comfortable, from a strength standpoint and from a security standpoint,” Esquerre said. “Once we get that down, everything starts to flow.” Women who have young children are very safety conscious, Esquerre said. The couple that they’re training just decided to go the biometric safe route to keep their firearms away from their children.

“Women are very sensitive to the safety issue, and they want absolute guarantees that their children and their friends are not going to get access to a gun,” he said. Esquerre said he and Jolyn train quite a few couples where the woman is the primary defender of the home. Even when that’s the case, he said, it’s important for the couple to train together so they have a strategy for working together should the unthinkable happen. 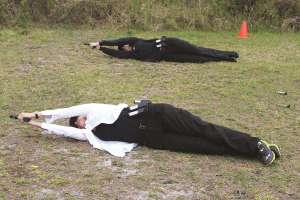 “If they train together, they have an understanding of each other’s role, and they know how to be supportive of each other,” he said. “We’ve also found that women who get involved with firearms from a self-defense standpoint, whether it’s just for the home or just outside, have an awareness that is comprehensive and all-inclusive and covers everything that they do with their lives.” This includes when they’re at home or when they go shopping or to work or to their kids’ school, Esquerre said.

“Their sense of awareness and alertness and not getting caught in a bad spot is totally expanded,” he said. “Once they get good high end training they tend not to become a victim, because they tend to avoid those circumstances or those situations more readily than someone who is unaware and who has never had good training.”