The author, Tara Dixon Engel, started out life “nursing a distinct distaste for guns, hunters, and anyone who claimed to be a shooter.” This continued into her twenties until she met, fell in love with, and ultimately married a “young man whose passion was duck hunting.” While that opened up the world of rifles and shotguns for her, it wasn’t until many years later that Ms. Engel, as a result of a friend buying her a concealed carry class for Christmas, that she embraced handguns, self-defense, and the Second Amendment, too.

Fast forward even more years, and Tara Dixon Engel had remarried to a law officer, had a child, and became an NRA-certified instructor, firearms salesperson, and advocate for Second Amendment rights, especially for women. 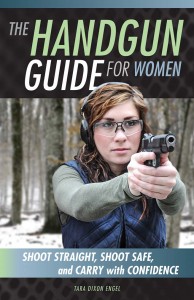 She wrote this book, just published late last year, “to fill a void that I found when I was learning to shoot—namely, the lack of printed material geared toward new shooters, and, specifically, new female shooters.” It can be an intimidating place, fraught with strange customs, terminology, societal distain from uninformed quarters, and seemingly somewhat closed to outsiders, women in particular. Engel has, in these readable 192 pages, packed virtually everything, A to Z, soup to nuts, that a neophyte will undergo, have questions on, or be concerned about. Now that’s a tall order, but Engel was up to the task.

She has an easy-going style of writing, oftentimes tongue-in-cheek, and a great sense of humor. Starting off with her journey and how she got to today, the author dissects and distills everything for easy consumption by the newbie. What guns are, their functions and names, comfort, fit and purpose, recoil, “size does matter,” grip, stance, ammunition, even cleaning and storage. Tara Dixon Engel uses lots of personal stories—this makes the reading even more interesting, and they are perfect to emphasize the points being made.

She has a unique way of looking at firearms, which, as a male, had never occurred to me, but bring instant identification with a new woman shooter. Firearms are like shoes, each has a different purpose, so you therefore need many for different occasions. The Glock Gen 4 grip texture may be more secure in a man’s hands, but can abrade a woman’s hands, not to mention snag and pill her clothing.

Sprinkled throughout the book are some more Engel bon mots—her “Gun Girl Tips,” twenty seven of them. Always she relates to her target audience, fledgling or prospective female gun owners. Not only imparting basic, yet critical information, but dispelling misinformation and old wives tales. “So ladies, if you have mastered child rearing, driving, cooking, running a business, or anything else that once seemed daunting, I have no doubt that learning to use a firearm safely and competently will come just as easily.”

While a number of books have great information, they don’t help the reader reacquire those facts later on. The Handgun Guide for Women, though, does that in spades. In addition to the traditional Table of Contents, there is a Chapter Summary at the end of each chapter, a glossary at the end of the book, and an alphabetical Index. There are also URLs for the major gun manufacturers, “Valuable Links,” (including “Women & Guns”), and URLs for gun laws in each of all 50 states, Guam, and the US Virgin Islands.”

Five star rated on Amazon for a good reason, this is a worthwhile addition to your library. Get two, one for yourself, and one for a newbie friend.

Taking Rifle Skills To the Next Level

Snipers have existed since man first started using firearms for warfare. Someone was always the best with a rifle, and that someone was the sniper—charged with making the impossible shots. 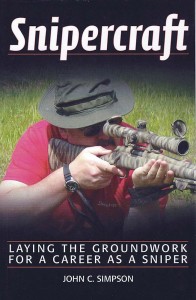 During World War I there was some opprobrium attached to the term, since by then the sniper had learned to hide himself, and in some cases, lay in wait for his target. “Not quite cricket,” during the War to End All Wars, where modern warfare, including all of its new tools, was just beginning.

Today we use the term both in the military sense, where the sniper’s role hasn’t changed much in several hundreds of years, even as his equipment and technique has evolved, and to refer to someone achieving excellence in marksmanship.

Simpson has been teaching both military and law enforcement sniper skills for over three decades, and his breadth of knowledge shows in this careful book.

The chapter on firing positions, includes the information that the sitting position (still used today), was deployed during the Civil War.

Anyone interested in literally honing her rifle skills, particularly with the current interest in 3Gun competitions, will find something useful in this book.

Lost in a Good Book

I like reading cookbooks and dictionaries and filmographies, so the Blue Book of Gun Values, which is a little bit of all those things, is right up my alley. 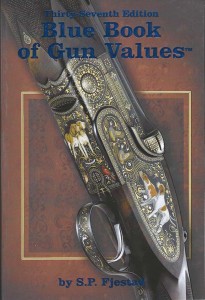 Most folks consult it to see what their own guns are valued at, or to check prices before buying a used gun and that’s what the book is really for. (Along with a purchasable CD-Rom or online subscription to the website—chose your preferred medium!)

But there is also something fun about just leafing through it randomly (although “leafing” through a 1200+ page paperback requires a sturdy table and good wrist strength!) and stopping at what takes your fancy.

Each manufacturer starts with a brief history of the company, including whether it’s still in business, before exhaustively listing all the guns made and their market prices by condition.

The book clearly explains the factors going into condition ratings of 60%-100%, and that is well worth reviewing before you either buy or sell, since one person’s 90% is another’s 70%.

From A.A. (for Azana & Arrizabalaga, a Spanish handgun maker) to Zoli (an Italian shotgun maker), the Blue Book of Gun Values has pretty much every gun made covered.

It’s also a pretty complete reference book for any gun owner, as it contains a thorough glossary, schematics of all types of firearms and a “Trademark Index,” which includes web addresses for all the active makers.